This week's carnival of space is live at Catholic Sensibility. Go check out the roundup of news and opinions from around the Internet!

It's not quite a carnival atmosphere yet here at the Jet Propulsion Laboratory for the upcoming Phoenix landing; the press room is murmuring with activity, but no more. Part of the reason, I think, is the utterly depressing weather outside. Having lived in Los Angeles for seven years now, I am entirely unaccustomed to the kind of weather that a Brit would consider normal, and yesterday there was incredulity on the part of everyone in the press room at the natural performance outside: a veritable hailstorm, complete with thunder and lightning and rain and a spattering of quarter-inch (that's half-centimeter) hailstones. Veronica McGregor, the JPL staffer in charge of herding the press for this event, decreed it to be an ice delivery in honor of the impending arrival of Phoenix at Mars' north pole. Today, there's no more hail, but it's still dismal and rainy outside. I hope the weather doesn't interfere with any of the communications planned for Sunday's landing... 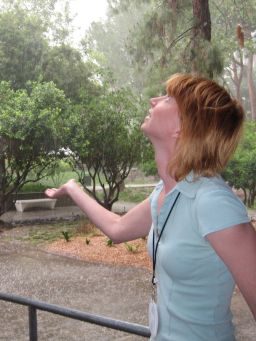 What's this wet substance falling from the sky?

In honor of the approaching polar landing of Phoenix, it hailed at the Jet Propulsion Laboratory two days before. 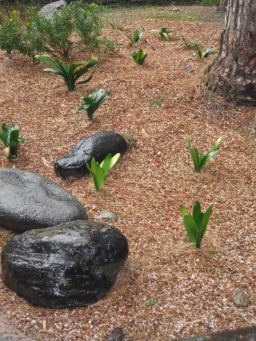 Hail at JPL for Phoenix landing

In honor of the approaching polar landing of Phoenix, it hailed at the Jet Propulsion Laboratory two days before.