EDIT: I've corrected an error in the location of the ellipses on the geologic map below.

Those of you who are following the Phoenix mission via its Twitter messages have read that they performed a late adjustment to the target point, shifting it 18 kilometers to the northwest of its previous location (which was, confusingly, 13 kilometers to the southeast of the target point on most maps you can find on the Internet).
Share this story!Send to a friend - Slashdot - Digg - Reddit
Del.icio.us - Newsvine - NowPublic
Since I was befuddled about what that meant about Phoenix' target location, I asked for help from Tim Parker at JPL, who is the acknowledged master of locating and mapping the landing sites of Mars missions, past and future. Tim graciously provided me with the map that he said he will be using on the day of the landing, which shows the current location of the 1, 2, and 3-sigma landing ellipses (for more on what that means, check out my entry with Rob Manning's explanations on that topic). And, for reference, he said that the target point is now 68.151 degrees north, 233.975 degrees east. I've updated my Phoenix landing site page accordingly. 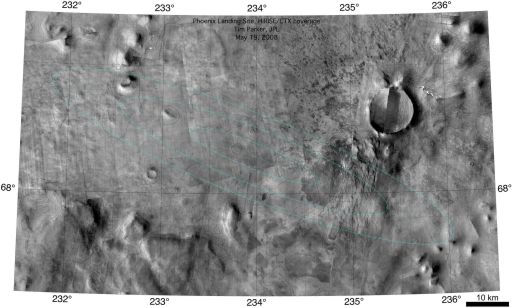 The 1, 2, and 3-sigma landing ellipses for Phoenix are overlaid on a base map composed of images from Mars Reconnaissance Orbiter's HiRISE and CTX cameras. This map of the Phoenix landing site is up-to-date as of May 19, 2008. The center of the landing area is at 68.151N, 233.975E. 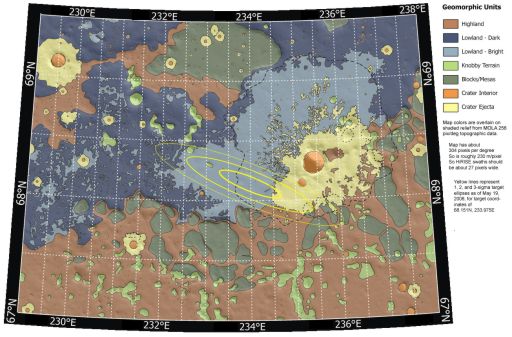 Phoenix is scheduled to land May 25, 2008 in a region above Mars' Arctic Circle. Its 3-sigma landing ellipse (largest yellow oval, the region in which there is a 99% certainty that the lander will come to rest) is about 100 kilometers long and 19 kilometers wide, centered at 68.151 degrees north, 233.975 degrees east. This map is current as of May 19, 2008, a week before the landing, and accounts for a late northwestward shift of the target point. This map has been corrected from previous versions, which had the lines of longitude mislabeled, with the result that the ellipses were shifted from their correct locations by half a degree.
Many thanks to Tim!