Those of you who pay attention to any source of space news other than this blog are probably wondering why I haven't mentioned this item yet. Last week, one of the HiRISE bloggers, Guy McArthur, posted an entry in the HiBlog in which he noted that the Mars Reconnaissance Orbiter mission had released to the public all of the images they'd acquired over the area in which Mars Polar Lander is thought to have come down on December 3, 1999. Of all the missing Mars landers, Mars Polar Lander is the one that we have the best chance of spotting in HiRISE images. HiRISE will only image about 2% of all of Mars, so it's unlikely that missing landers will be spotted by chance; the mission has to mount a concerted campaign to use up some of that precious imaging area in a perhaps unrewarding search. Mars Polar Lander is the missing lander whose crash site is most narrowly constrained, so the search requires a manageable number of HiRISE images.

The reason it's taken me so long to get to this story is because I wanted to do more than mention it, I also wanted to give people some help in actually contributing to the search for the missing lander. So I've written, and finally posted today, a lengthy page showing you what the successful landers have looked like to HiRISE, and linking to all of the images of the Mars Polar Lander area that HiRISE has obtained so far. (They're not going to get any more images for many months, because it's winter, and therefore dark, at the landing site.) What I would really love is if any of you readers out there who wanted to join in the search would write to me and let me know which image you're searching, or ask me to assign you one, so that we can spread out the effort of all the volunteer searchers and make sure each image is examined by multiple people. I've also given some guidelines on how to report anything that you think might be a piece of the missing Mars Polar Lander. So if you want to join in the search, go check out that page.

The timing of this announcement is interesting. In a little more than a week, Phoenix will attempt to land at the opposite pole of Mars. This is the scariest part of any Mars mission. We know the spacecraft is healthy, it's been operating well, and there's no particular reason to think it won't succeed -- except that there have been five dramatic failures with Mars landers: Mars 2, 3, and 6; Beagle 2; and Mars Polar Lander. There were also five successes: Viking 1 and 2, Mars Pathfinder, and the two rovers. Phoenix will break the tie, one way or another. On May 26, will we be examining new images from Phoenix, or will we be starting another HiRISE imaging campaign to find its wreckage? Scary thought.

Just for fun, here's what all the landers, backshells, and parachutes of all the successful landers have looked like to HiRISE. 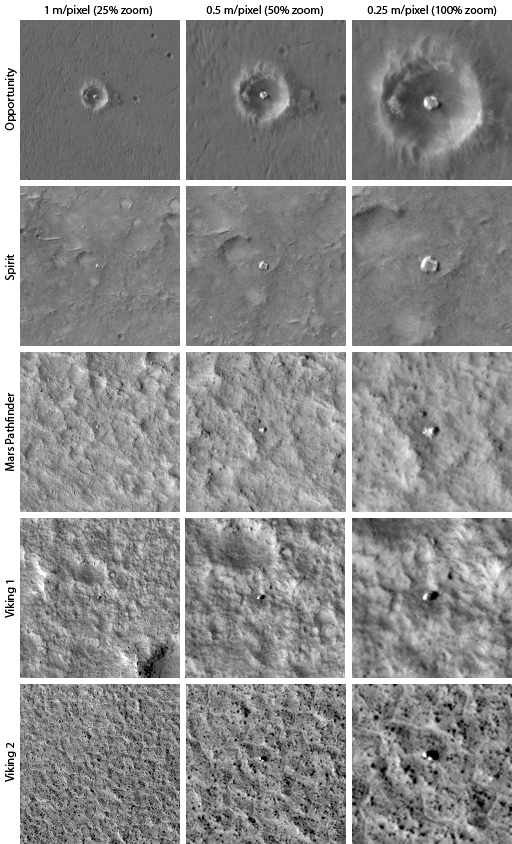 Landers on Mars as seen by HiRISE

Mars Reconnaissance Orbiter has successfully imaged all five of the successful Mars landers: Spirit, Opportunity, Mars Pathfinder, and the Viking 1 and 2 landers. Since the landers are only approximately two meters in diameter, they are only a few pixels across even at the extreme resolution of the HiRISE camera. 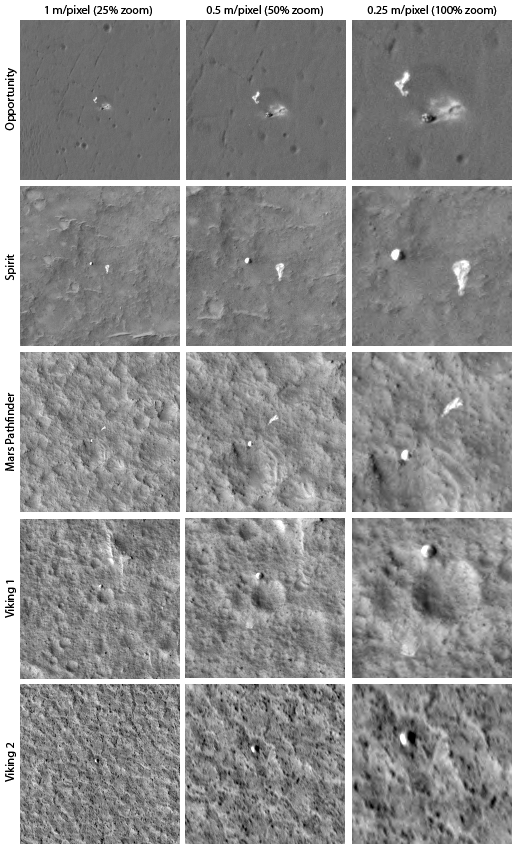 Backshells and parachutes on Mars as seen by HiRISE

Mars Reconnaissance Orbiter has successfully imaged all five of the successful Mars landers: Spirit, Opportunity, Mars Pathfinder, and the Viking 1 and 2 landers. For most of these, it was easier to spot the backshells and attached parachutes than the actual landers. Provided they are not obscured by dust, the white parachutes appear bright against the Martian ground, and are much larger than the landers.