It's been quietly posted to the website for Lunar Reconnaissance Orbiter, NASA's boat in the flotilla of spacecraft being launched to the Moon, that the launch date is now November 24, of this year, about a month later than previously stated. Unlike planetary missions, lunar missions can generally cope with month-to-month delays like this. According to the launch table at Spaceflight Now, there are four launch opportunities from November 24-27, each with comfortably long 90-minute launch windows. They also list launch windows for two sets of dates in December. 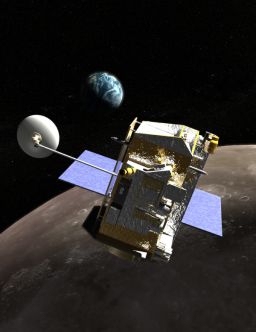 An artist's conception of the Lunar Reconnaisance Orbiter (LRO) in orbit around the Moon.
When Lunar Reconnaissance Orbiter launches has a direct effect on when the LCROSS mission will impact the Moon, because LCROSS is hitching a ride to the Moon on the same rocket as Lunar Reconnaissance Orbiter. LCROSS is kind of like Deep Impact in that it consists of two spacecraft, an impactor and an orbiter; it'll send the impactor to slam into a permanently shadowed spot on the lunar south pole and then examine the resultant plume to measure the compositon of the surface and search for water. What I hadn't appreciated is that a change in the launch date may also affect where on the Moon LCROSS makes its splash.

Previously the LCROSS mission stated that they were planning to send their impactor to Shackleton crater, which sits smack on top of the lunar south pole. However, according to Frank Morring at Aviation Week, the mission was already considering moving the aim point to an older crater than Shackleton -- Morring doesn't state why, but I assume it is because an older crater is more likely to contain water. There are craters just to the north of Shackleton, he said, that are also permanently shadowed. And, he said, the prime candidates are Shoemaker crater and Faustini crater. I think it would be absolutely tremendous if our artificial impactor wound up striking a crater named for one of the pioneers of impact geology, Gene Shoemaker. But Morring says no final choice has been made, and that it will depend upon when Lunar Reconnaissance Orbiter launches. 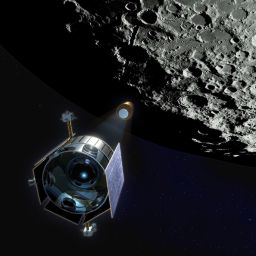 The LCROSS spacecraft watches as the launch vehicle upper stage aims for a lunar impact.
Thanks to several folks at unmannedspaceflight.com for pointing out this news! The launch delay has no impact on when names collection for the "Send Your Name to the Moon" opportunity closes -- that date is still June 27. So get your names in!