I apologize for the long hiatus in this White Rock series, but I hope this entry will be worth the wait. Mars Reconnaissance Orbiter is the latest and greatest of Earth's orbital emissaries to Mars. It's much bigger than either Mars Global Surveyor or Mars Odyssey and has a correspondingly huge radio dish, which it needs in order to return about a couple of Terabits of data every month. Actually, the dish is so large and the communications system so robust that the orbiter is capable of returning more data than all the instruments put together can collect, or so HiRISE principal investigator Alfred McEwen told me after I injudiciously used the adjective "bandwidth-hogging" to describe his instrument. (My apologies, Alfred!)

I'm going to skip MARCI as I consider Mars Reconnaissance Orbiter's view of White Rock because, to really show you what MARCI is for, I should produce an animation showing what the sky looked like over White Rock over the course of the changing seasons. I'll just note that it's theoretically possible to do such a thing, but it probably wouldn't be worth the effort for the present exercise, as the data isn't archived in a particularly easy-to-use fashion. It would be worth the effort, though, to examine what the weather has looked like over time in the region surrounding the rovers, or over the Phoenix landing site.

So: on to CTX. Here's the CTX view of White Rock. I had to crop the top and bottom and do some pretty strong JPEG compression on this image to fit it under the 2-Megabyte limit of direct posting to our website; you can download the full-size image in PNG format here (28 MB). 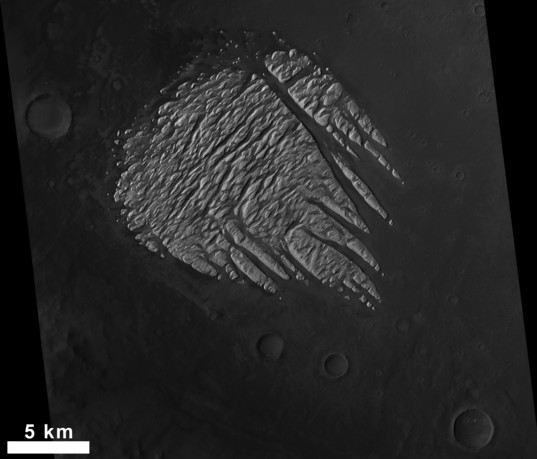 The Context Camera (CTX) on Mars Reconnaissance Orbiter captured this view of the enigmatic White Rock deposit within Pollack crater on Mars on January 7, 2007. The image has been calibrated and map-projected to a resolution of 5 meters per pixel. The full CTX image can be downloaded in PNG format here (28 MB).

If you compare to the view from Mars Global Surveyor MOC (which was at about double the resolution of 2.86 meters per pixel), you can see that CTX doesn't improve on MOC in terms of the detail it reveals; the two cameras achieve pretty similar levels of detail. So why bother sending another camera to Mars that can get pictures of pretty much the same quality that MOC did? Remember that it's not just about spatial resolution. CTX wins over MOC in terms of areal coverage. CTX can take in all of White Rock and some of the surrounding area in one photo, providing what will no doubt become the base map for my final summary post of this White Rock series. With MOC (and also THEMIS), more than one image was required to cover White Rock, and those images had to come from different orbits, possibly with different atmospheric conditions and even different seasons resulting in different lighting angles.

So CTX gives us the context. With that beautiful image to guide us, let's look at what CRISM can tell us about the composition of the rock. I've written before (see also here) about how the CRISM team has put together some neat ways to display their data so that even people who aren't spectroscopists or mineralogists can at least determine whether a place on Mars is compositionally interesting or not. Sadly, White Rock turns out to be pretty boring when viewed by CRISM. (When I was exchanging emails with the CRISM principal investigator Scott Murchie about this project, he seemed a bit chagrined that I'd be examining such a dull place, as it doesn't really demonstrate what CRISM is capable of.) 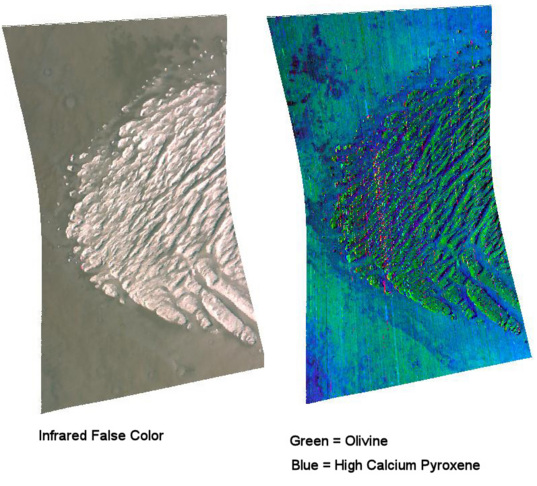 An infrared false color view of White Rock (left) shows that the feature is reddish in color, the same as Martian dust, while the crater floor it sits in is darker and bluer. The right-hand image shows the signatures of different minerals that are present. According to the CRISM team, "CRISM found that White Rock is composed of accumulated dust perhaps with some fine-grained olivine (an igneous mineral), surrounded by basaltic sand containing olivine and dark-colored pyroxene. White Rock still appears not to contain evaporite, but instead to be composed of accumulated dust and sand."

But a negative result can be an important one. We already knew from the TES, THEMIS, and OMEGA views of White Rock that the initial impression, that White Rock might be made of minerals evaporated from an ancient crater lake, was unlikely to be the correct interpretation. But CRISM's much higher spatial resolution allows it to look in the nooks and crannies of White Rock. If there was any real signature of water activity inside Pollack crater, CRISM should have been able to spot it; but all CRISM really sees is olivine and dust, so I'd say that we can really be very certain that White Rock is nothing more than cemented windblown sand and clay.

Even so, it's a pretty and dramatic landscape. And it's even prettier when viewed at the stunning level of detail afforded by HiRISE images. This first image is just to orient you, give you a sense of how much of White Rock is visible in one HiRISE observation, but even the one-Megabyte click-to-enlarge version is shown at only five percent of the full resolution.

White Rock from Mars Reconnaissance Orbiter: HiRISE swath of most of central mound

Mars Reconnaissance Orbiter's HiRISE camera captured this view of White Rock, Pollack Crater, on January 7, 2007. This version of the image has been downsampled to 5 meters per pixel, about 1/20 of the full resolution of the HiRISE camera.

Are you ready? Let's zoom in to an area near the northern edge of White Rock and view it in infrared false color. With the relatively light-colored materials of White Rock dominating the pixel values, the sand around White Rock looks positively blue. 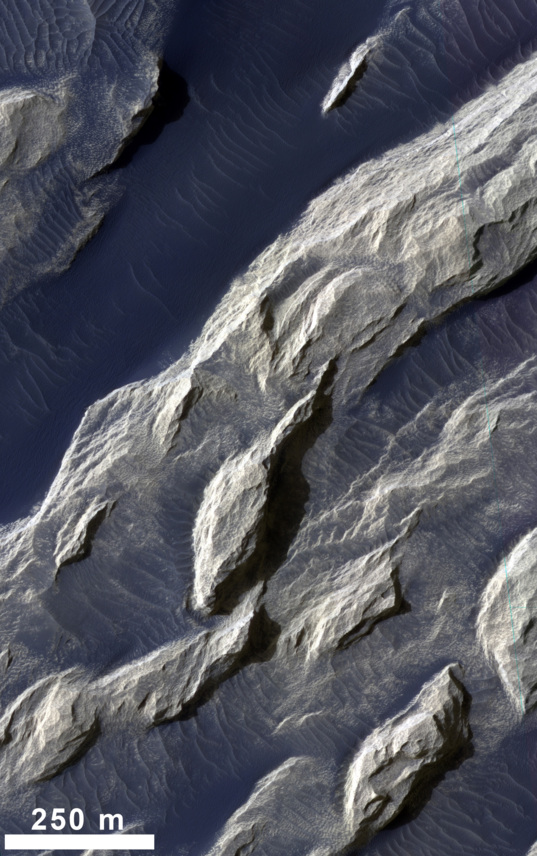 This is a segment of a HiRISE image of White Rock, Pollack crater, Mars, shown (in the enlarged version) at 50 centimeters per pixel, half its full resolution. The blue areas are olivine-rich basaltic sand. The yellow areas are the outcrops that form White Rock. Everywhere, the blue sand forms dunes, even across the steep landforms of the White Rock deposits. It is difficult to determine whether the White Rock deposits are layered because of the confusing patterns formed by the sand dunes. You can see more of this image at the HiRISE website.

When you zoom in -- and you really have to click on this one and wait for it to download so that you can see the amazing detail, which I'm only showing at half of the full resolution -- you can see that the sand that lies between the White Rock outcrops breaks up into mesmerizing patterns of intersecting dunes, dunes at a wide variety of scales, straight dunes, scaly dunes, dunes upon dunes. And, if you look at the White Rock material itself, you can suddenly realize that a lot of the odd and difficult-to-interpret texture (is it layering, or not?) is due to what look like little dunelets of sand marching across every horizontal surface (and even some of the non-horizontal ones). The same force that builds those dunes -- wind, and the sandpaper-like action of windblown sand -- has sculpted and faceted every exposed face of the White Rock outcrop, leaving it a patchwork of bright rock and dark dunes. The MOC team thought they saw layering in some of their images, but having seen this image, I'm no longer so sure; there may or may not be layers, but it's hard to tell because contrast of features within the White Rock material is overwhelmed by the contrast between White Rock and the wisps of dark sand that have drifted across it.

Like most other HiRISE images I've looked at, this one fascinates but also stupefies me. It shows me Mars at a scale that I could walk with my own two feet. I can reach out and touch it. It seems that, with my previous experience in field geology, I should be able to interpret what I see intuitively. But it's almost too close. I can't wrap my mind around the features I'm seeing and figure out what they mean about the geology of the region as a whole. I'd almost rather step back and look at Mars from the perspective of CTX. CTX is a scale at which I can look at features all over Mars, compare them, and build up some kind of global view of Mars' history. At the scale of HiRISE, everything is local; Mars breaks up into a world whose land area is, after all, as large as Earth's; and just imagine how many thousands, tens of thousands of geologists there are studying Earth at this scale! With the advent of HiRISE, it seems a Mars geologist could spend a whole career studying just one place -- Melas Chasma, say, or Nili Fossae, or the south polar layered deposits, and even then she'd only scratch the surface. Mars Reconnaissance Orbiter is the newest one at Mars, and it will remain the newest orbiter for many years; the only future Mars orbiter currently under construction is the tiny Chinese Yinghuo-1 (I'm not counting Phobos-Grunt, which will orbit Mars but will be focusing on its moon Phobos). So this wraps up my journey through the history of orbital views of one little place on Mars. I plan to write one last post attempting to bring all this together.