Spring has come to the north pole of Mars, and with the long-awaited arrival of the Sun to light things up the Mars orbiters have been busy capturing images of the Phoenix landing site. They have two goals: to wallpaper the landing ellipse with high-resolution images, so as to be prepared to find Phoenix and identify nearby landscape features after it lands; and to monitor the weather. Any place that is dark half the year and sunlit half the year has interesting weather, particularly during the spring and fall when it transitions from one state to the other. As a part of the weather monitoring campaign, the Context Camera on Mars Reconnaissance Orbiter spotted two enormous dust devils, at the dead center of the Phoenix landing ellipse. 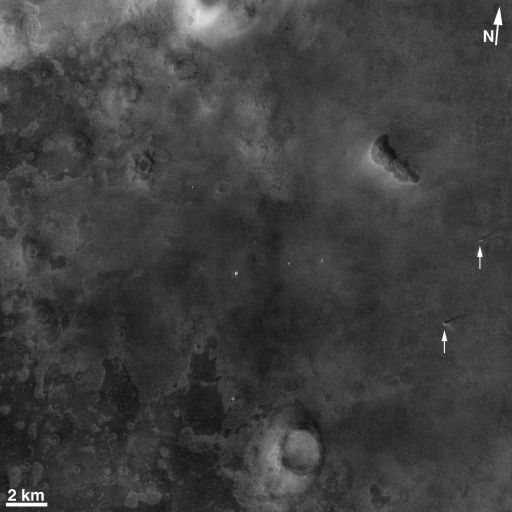 The Context Camera on Mars Reconnaissance Orbiter repeatedly examined the near-polar landing site of Phoenix as spring came to the pole in early 2008. This image, taken on April 20, shows that nearly all of the seasonal polar ice cap has sublimated into the air (except for a few bright remnants within small craters), and also contains two towering dust devils.
And here's a closeup: 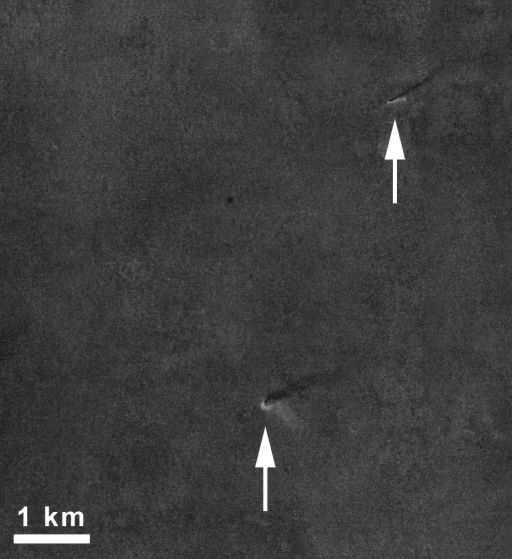 These dust devils are HUGE, reaching hundreds of meters into the sky. This is not only cool, it's good news. One of the worries that I have about the Phoenix mission is that it just has no hope of being as charismatic as the Mars Exploration Rover mission. The rovers move, after all, and have given us many different kinds of views, while Phoenix will stay right where it lands. That means that every single day of the Phoenix mission, the landscape will have the same shape (although the motion of the Sun, hour to hour and day to day as the season changes, will add some variety). What's worse is that, if the landing site selection committee has done its work well, the landscape should be mind-numbingly flat and devoid of large rocks. The flatness means we should see a long way, but see a whole lot of nothing. I'm envisioning west Texas without vegetation. I'm not looking forward to the underwhelmed response to the landscape from the mainstream media.

But if that flat flat flat landscape occasionally contains kilometer-high dust devils, Phoenix should be able to spot them from miles away (if you'll pardon the mix of units). And I know that the Mars Exploration Rover team has really polished computer algorithms that allow them to take lots of photos of the landscape and automatically check whether those photos have dust devils in them, and then only return those interesting photos to Earth. So, having seen these monster swirlies in the CTX image, I'm hopeful that there will be some dramatic movies of slowly twisting dust devils to be returned from the Phoenix mission. It's not what Phoenix was sent to Mars to study, but it should provide some attention-grabbing drama.

Only 19 days 'til landing! Tell all your friends!