New names for features on Mercury and Tethys

Last month I wrote about new names for features on Dione, and this month the IAU has approved a pile of new names for Mercury and Tethys too. The Mercury names were formally approved three weeks ago, and at the time I wrote to some friends on the MESSENGER mission to see if they had a map or anything that I could use to illustrate a post about them -- all the new names were for features revealed on the new MESSENGER images of the previously unseen face of Mercury. They didn't seem to have one handy, but yesterday they released one. I wonder if my hassling had anything to do with the map release? I never know whether my inquiries to mission personnel are more irritating ("Sheesh, Emily's bugging us again") or useful ("Emily asked this question, maybe that's a good idea for a release"). Probably some of both.

Anyway, having spent many quality hours in my childhood poring over atlases, reading names of strange and foreign places on this world and others in the solar system, I am always intrigued by new maps filled with new names. Actually, the names are rarely new; they are usually chosen either to honor distinguished deceased Earthlings, or from lists of Earth place names, or from works of Earth fiction. So studying these new maps provides an impetus to learn about our own culture, to dig into books and Internet to find out just who were Sveinsdóttir (a 20th century Icelandic painter) or Eminescu (a 19th century Romanian poet), who have just earned the distinction of having Mercurian craters named for them.

I've just posted an article, with maps, of the new names for Mercury, Tethys, and Dione. (Many thanks to Jason Perry for drawing up the Saturn satellite maps.) I'll feature one of the new Tethyian names here. I am absolutely delighted that there is finally a name for the feature that I have always had to describe in phrases like "the southern end of Ithaca Chasma wraps around a giant impact basin that is so battered as to be nearly invisible." That basin - which is 300 kilometers in diameter, truly huge -- now has a name, Telemus. 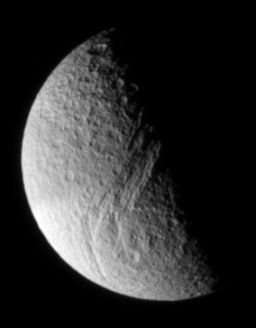 Ithaca Chasma curls around an unnamed multi-ringed impact basin the 300-kilometer-diameter Telemus basin in this Cassini view from December 15, 2004.