At Saturn, Cassini is currently on rev 66, a 9.6-day, steeply inclined orbit around Saturn. It crosses to the lit side of the ring plane at 10:43 UTC on April 30, reaching periapsis two hours later. It returns to the north (dark) side of the ring plane on May 2 at 21:15. No targeted flybys or more distant approaches to the major moons will occur this week. Last week's image releases included two of moons in the Roche division, Atlas and Prometheus; north polar global views of Rhea and Dione, including one of Dione taken with Saturnshine illuminating the night side; and a panoramic view of 255 degrees (about 70 percent) of Saturn's F ring. 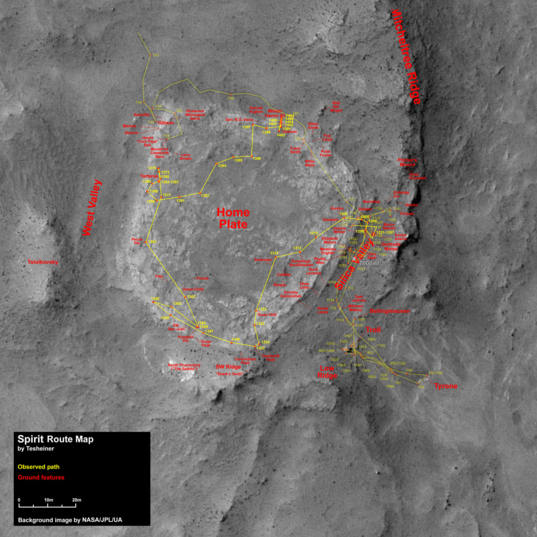 On the surface of Mars, it is late autumn in the southern hemisphere (Ls 65°), sol 1,536 for Spirit and sol 1,515 for Opportunity. Spirit is still parked on the edge of Home Plate, in the same position it has occupied since sol 1,464 (February 15), with its solar cells pointed northward toward the winter sun. Opportunity is sitting on the slope of Duck Bay, with its wheels dug in to a patch of sand, diagnosing a problem with the shoulder joint on its robotic arm. Its current plan of activity is to drive to Cape Verde, to its northeast. Phoenix is zeroing in, now only 27 days from its May 25 landing. Mars Reconnaissance Orbiter's MARCI camera is documenting the approach of spring to the north pole: common spring weather includes dust storm activity and water ice clouds near the seasonal north polar cap edge, clouds and dust activity in the southern mid-latitudes, and the early development of the aphelion cloud belt. The latest weather update states:

As of the past week, the seasonal north polar cap edge had retreated to about 70 degrees north latitude. Water vapor released from the north polar cap was transported southward by the general circulation to the northern tropics, where it formed into clouds as part of the aphelion (equatorial) cloud belt. Water ice clouds were also observed over the major shield volcanoes and in the southern mid-latitudes. Hellas and Argyre remained rather hazy due to these clouds. A number of local dust storms were observed west of Argyre basin and more sporadically throughout the rest of the southern mid-latitudes. One dust storm of note occurred mid-week along the north polar cap edge, lifting dust onto the perennial cap. This storm abated within a couple days. The two MER rover sites (Gusev Crater and Meridiani Planum) continued to experience scattered water ice cloud cover throughout the week, but remained free of any afternoon dust storm activity. 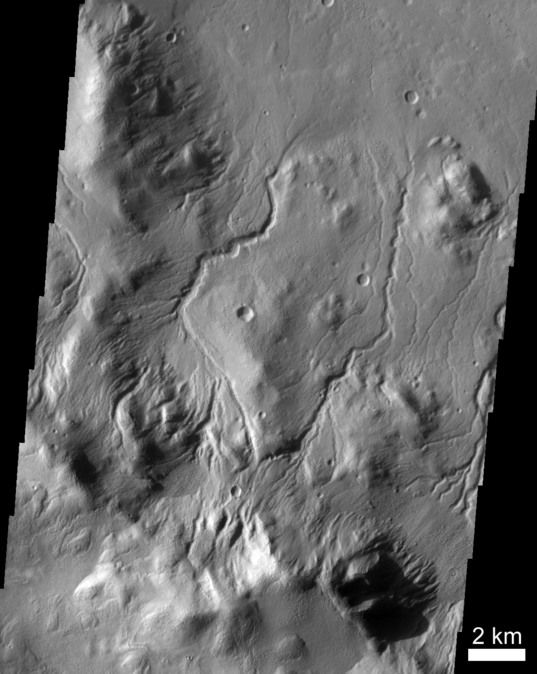 Channels on the rim of a martian crater

Sinuous, dendritic channels cut in to the north-facing rim of an unnamed crater in Terra Cimmeria, Mars, in this daytime infrared image from the THEMIS camera on Mars Odyssey. Terra Cimmeria is in Mars' southern highlands.

In orbit, the Mars Odyssey mission released images last week of landslide deposits in Coprates Chasma, faults on the western margin of the Elysium volcanic complex, huge landslides in Aeolis Mensae, sinuous channels dissecting the rim of an unnamed crater in Terra Cimmeria, and a rampart-edged landslide deposit on the northern rim of Montevallo Crater. The Mars Express mission released an image of a river delta in Nepenthes Mensae, at the boundary between Mars' highlands and lowlands. The Mars Reconnaissance Orbiter mission released three images of proposed Mars Science Laboratory landing sites (Eberswalde crater, Mawrth vallis, and Holden crater), as well as views of dissected mantle terrain and scallops in Tempe Terra; alternating light- and dark-toned layered sediments in Hellas Planitia; and many "craters within a crater" in Schroeter crater, near Mars' equator, where many episodes of geologic activity have degraded many of the craters, filling them with dunes and sediment, and, in some places, emptied them again.

At the Moon, Chang'e 1 and Kaguya are currently in orbit. Nothing new was released from either mission last week. At Venus, Venus Express is currently in orbit. Nothing was released last week from that mission either. MESSENGER is cruising toward its second encounter with Mercury on October 6. It is 130 million kilometers from Earth and 137 million kilometers from Mercury. There were no new image releases last week, but there was one this morning that I'll be talking about later today.

Out in space, New Horizons is 9.01 AU from Earth and 21.87 AU from Pluto, approaching Saturn's distance from the Sun. Dawn, Deep Impact, Genesis, Hayabusa, Rosetta, Stardust, and the Voyagers are cruising and actively speaking to Earth.