I have just posted an update to the Phoenix section of our website giving some basic location and description information on the Phoenix landing site. Right now the landing site is a large ellipse -- an oval 100 by 19 kilometers in size. But Phoenix is a sedentary lander, and when it comes to rest on May 25 it could be anywhere within that ellipse (though it's more likely to land near the center than close to the edge). Although no one on the mission has said as much to me (nor will they, as such things cannot be officially sanctioned by a government-run organization), I can absolutely guarantee you that somewhere in JPL, somebody is running a pool challenging people to guess where in the ellipse Phoenix will fall. The ellipse is stretched much more in the down-track direction than the across-track direction because of uncertainties in what Mars' weather holds in store for the incoming lander -- a tiny change in atmospheric temperature or density can cause the lander to decelerate more or less rapidly, which results in a landing seconds (and kilometers) earlier or later than the predicted time. I am also sure that the Phoenix mission team is glued to current weather reports from Mars, like the ones summarized in the weekly weather updates on the Mars Reconnaissance Orbiter MARCI instrument team website.

Share this story!Send to a friend - Slashdot - Digg - Reddit
Del.icio.us - Newsvine - NowPublic
It's now only 30 days from landing! Here is a neat countdown clock for the upcoming Phoenix landing, far more detailed than the usual -- it contains information on specific recent and upcoming mission milestones like rocket firings and events in the entry, descent, and landing phase of the mission. According to that site, Phoenix is at this moment just under seven million kilometers from Mars. 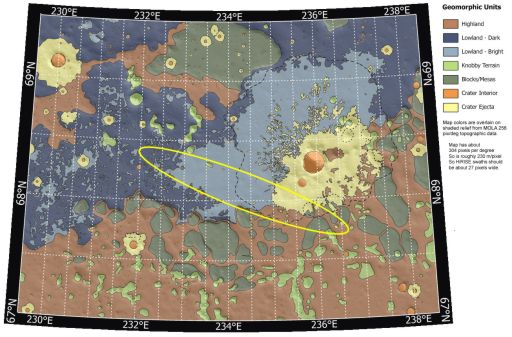 Phoenix is scheduled to land May 25, 2008 in a region above Mars' Arctic Circle. Its landing ellipse (the region in which there is a 99.9% certainty that the lander will come to rest) is about 100 kilometers long and 19 kilometers wide, centered at approximately 68 degrees North, 234 degrees East. The ellipse has been shifted downrange by about 13 kilometers from an earlier, similar map in order to avoid boulder-rich regions that are now just off the northwestern end of the ellipse.