It's so crazy it just might work: Send Cassini between the rings and the planet

Although the first mission extension for Cassini hasn't officially been approved yet by NASA Headquarters (which strikes me as being kind of silly, since the primary mission comes to a close in less than two months!!), the mission is already trying to figure out what to do beyond the two-year proposed Extended Mission. Last week there was a meeting of the Outer Planets Assessment Group, and Cassini's Deputy Project Scientist, Linda Spilker, gave a presentation on what to expect from the extended missions (here it is, in PDF format, well worth a look). There was a lot of stuff about the science to be expected from the extended mission, and a proposal for an extended-extended mission, but the real stunner was a scenario she presented for Cassini's end-of-life: to spend the very, very last phase of the mission in an orbit that threads Cassini between Saturn's cloud tops and the innermost D ring. 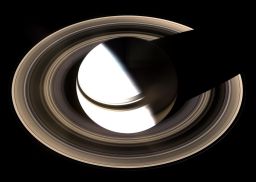 his view of Saturn shows the night side of the rings, a geometry that lights up the faint C ring, the innermost ring that's visible here. In the apparently black space between the C ring and Saturn is another, far fainter ring called the D ring. Only a tiny open space, about 3,000 kilometers across (that's a distance only 2.5% of Saturn's diameter) exists between the D ring and Saturn, and Cassini may be flying through it repeatedly toward the end of its mission.
Folks, the gap between Saturn and the D ring is only about 3,000 kilometers wide. I suppose for a mission to a place like Mars, 3,000 kilometers of leeway is quite a lot. But Saturn is 120,000 kilometers across, and the main ring system extends another 60,000 kilometers or so above Saturn; Cassini would have to do an orbital maneuver to majorly drop its periapsis (closest approach point) to right in between the planet and its rings, leaping over the main ring system in the process. The idea seems totally crazy. 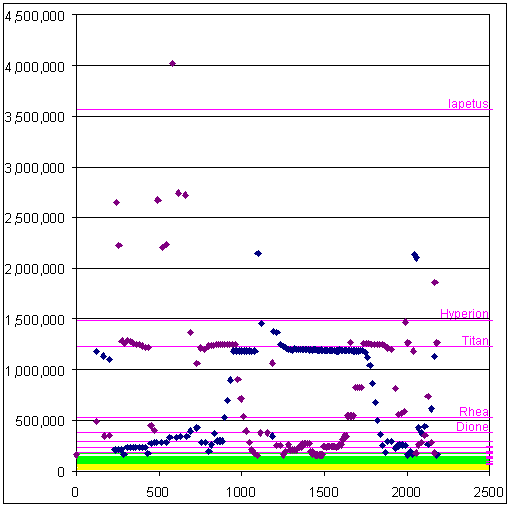 The X-axis represents time (days from orbital insertion); the Y-axis is distance from the center of Saturn. Magenta horizontal lines denote the orbits of the large moons. Green denotes rings A-G. Yellow denotes Saturn. Blue and purple diamonds denote the distances at which Cassini's orbit takes it through Saturn's ring plane. Blue diamonds are ascending ring plane crossings (from south to north), and purple are descending ring plane crossings (from north to south).
Let's zoom in to the part of the plot that's closest to Saturn. 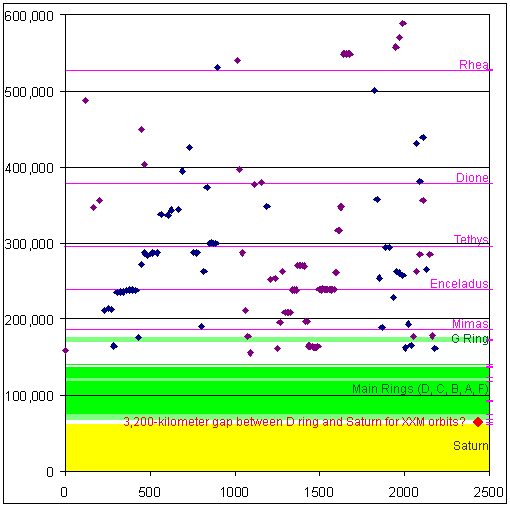 You can see that there's quite a few ring plane crossings at Enceladus' distance from Saturn. Some of these are close flybys; others had Enceladus nowhere near, but were valuable for Cassini to scoop up particles that Enceladus has been spitting out of its geysers. You can see that there are some, but not a lot, of ring plane crossings in between the F and G rings (including the very first ring plane crossing, which happened when Cassini entered orbit). The rings, shown in green, extend almost all the way down to Saturn, shown in yellow. OK, now look at that red diamond at the lower right. That's where they are proposing to send Cassini close to the end of the extended-extended mission. And it's not just a one-time thing, either; they can apparently orbit quite stably there, sending Cassini diving toward the cloud tops, between the rings and the planet, dozens of times. In fact, they can apparently keep doing that right up until Cassini is just about to run out of fuel. How can this work?

As usual when I have questions about Cassini's orbit I asked Dave Seal to explain things to me. First of all, how do you lower the orbit periapsis from outside the ring system to completely inside the ring system without somewhere crashing into the rings? Dave said simply that the tour designers figured out how to do it with just one Titan flyby; Titan flybys can change Cassini's speed by hundreds of meters per second, and "that's enough to go from just barely outside the F ring all the way to between the D ring and the planet" with just one gravity assist flyby of Titan.

A view of the D ring from Cassini is compared to a view from Voyager at comparable viewing geometry. The boundary between the C ring and D ring is marked on the Cassini image by a green line. The C ring is overexposed in the lower left corner of the Voyager image. The outer D ring feature called D73 lines up perfectly between the two images, separated by 25 years. So does an inner D ring feature called D68, near the right sides of the two images. But in the middle, the brightest feature in the Voyager image, called D72, does not line up with any feature in the Cassini image. The inset view shows the region outside D73 with its closely spaced wavelike features, so regular that they could be the grooves in a vinyl record.
OK, so the orbital switch can be done. But in my mental image of Saturn and its rings I always imagine stuff dragging from the D ring all the way down to Saturn's cloud tops. Is it really safe for Cassini to pass through that gap? Dave said that, so far, analysis of images suggests that there is a clear zone between the D ring and the planet. This gap is more clear than the outer edges of the G ring, which is clear enough that the mission has actually flown Cassini through it a few times; and remember that both Voyager and Pioneer 11 flew without incident right through the G ring itself (Pioneer 11 did it twice). So, although these things can be picked up on images, the particles within them are so very tiny that they present no danger to Cassini. (Cassini usually does ring plane crossings with main engine cover closed and the radar dish pointed to the "ram" direction to shield the more sensitive instruments from these tiniest of particles.) So the crossings should be safe.

A big question is how the orbit can be stable. Saturn is very noticeably non-spherical because of its fast rotation rate coupled with its low density -- it bulges hugely at the equator, making it "oblate." This oblateness means that the gravity field is a bit complicated, and exerts weird torques on orbits of bodies that are not orbiting in the ring plane. If you want the nitty gritty details about what happens to an inclined orbit under the effect of Saturn's gravity, Dave said:

The oblateness precesses both the line of apsides (the periapsis-apoapsis line) and the line of nodes (the line connecting the ascending and descending nodes = ring plane crossings). Think of the former as rotating the orbit in its own orbit plane, and the latter as rotating the orbit about Saturn's axis. The former moves the radii of the nodal crossings; the latter does not, it just moves their longitudes (or local solar time). The apsidal rotation goes to zero at what we've been calling the "critical inclination" which is about 63.5 degrees. So if you use Titan to crank the orbit up to 63.5 degrees inclination, all Saturn's oblateness does is precess the orbit in local Solar time (again, about Saturn's pole axis). You can then jump over the whole ring system at that inclination and the nodal radii stay right where they are - you don't get precessed into Saturn's rings.

Once this orbit is set up, it can be maintained for quite a long time with very small maneuvers and the occasional Titan flyby. Eventually, Cassini will be just about out of fuel. When that happens, a Titan flyby could be used to nudge the periapsis just a bit lower -- and Cassini burns up in Saturn's atmosphere. (Dave also mentioned that another option, which Linda Spilker's presentation doesn't mention, is to do these D-ring orbits and then actually bring Cassini back out again, to meet some other fate.)

At this stage, this idea for the end of the mission is hypothetical (especially since, as I said, they haven't even formally approved the extended mission yet, much less a second extension). There are other end-of-mission scenario ideas being tossed around, but as you might imagine this one is really getting the Saturn atmospheric, magnetospheric, and rings scientists -- basically, everyone but people who like to study the moons -- incredibly excited. Cassini could last many months in this configuration, jumping over and through the rings, descending deep into the magnetic field and charged particle environment, photographing the tops of the clouds from only 3,000 kilometers away (although at a high relative speed of 34 kilometers per second), and still jumping back out for the occasional Titan flyby. And they might not need to implement this endgame scenario for 6 or 7 years after the end of the extended mission, long enough for Cassini not only to see Saturn's equinox (which will happen in the middle of the first mission extension) but to see Saturn almost all the way through to the next solstice.