Cassini at a close apoapsis at Saturn

I was browsing the Cassini raw images website today and spotted the three different-filter images necessary to create this color view, so I threw them together. As with any color image made with raw data, the color is, at best, approximate. 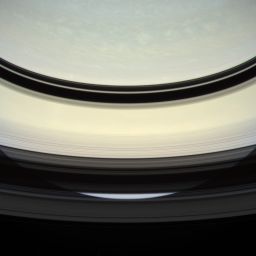 View of Saturn from Cassini at apoapsis

Cassini took the images for this color view of Saturn through its wide-angle camera from the farthest point on its orbit on April 6, 2008. The spacecraft was only about 1.4 million kilometers from the planet at the time.
I suspected by the unusual geometry of this image that Cassini was at periapsis, the closest point on its orbit, at the time that it was taken. I was wrong -- it was actually at apoapsis, the farthest point on its orbit. The reason I thought it must be periapsis is because this photo was taken with the wide-angle camera, yet Saturn way more than fills the field of view. I quickly realized, as I scanned the tour page, that Cassini's orbit has been shrinking and shrinking with time so that now the spacecraft circles the planet once every 9.6 days. This is really a huge change from just a few months ago; remember, last September, the navigators had Cassini on a very long, large orbit that looped it out to reach its one close flyby of Iapetus, the most distant of Saturn's icy satellites. Just after the Iapetus encounter, Cassini reached the apoapsis of an orbit ("Rev 50") that took 32 days to complete. Since then, though, each flyby of Titan has been pumping down that apoapsis distance. The next two orbits, Revs 51 and 52, started with 24-day periods. Revs 53 through 55 had 16-day periods. Revs 56 through 59, 12 days. And so on. Now Cassini is on a 9.6-day orbit, and it's going to continue shrinking through the end of the primary mission, when Cassini will be rounding Saturn once a week.