Although Mars Global Surveyor has fallen silent, scientists are still reporting new discoveries in its images. The latest astounding find from the long-lived orbiter is the familiar shape of another beloved spacecraft. 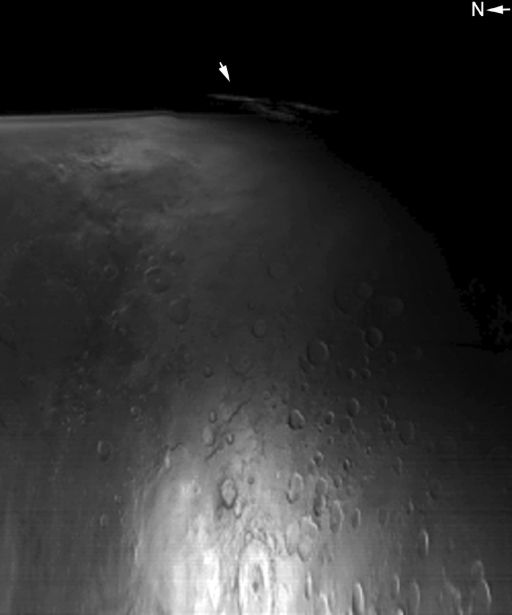 Where no man has gone before

The caption for this image provided by Malin Space Science Systems opens: "Are we certain that all of the spacecraft orbiting Mars were manufactured on 20th and 21st Century Earth?"

Well, yes, but this cloud formation certainly bears a striking similarity to this spaceship: 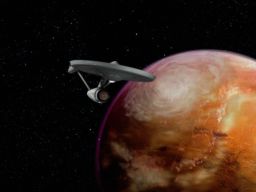 The Starship Enterprise flies by a terraformed Mars in the remastered version of the Star Trek original series opening credits.
The photo was captured by Mars Global Surveyor on March 27, 2001 as it was performing a slewing maneuver (an "off-nadir spacecraft reorientation"). The camera captured both the surface of Mars (bottom part of the image) and black space at the top of the image; features appear distorted because of the motion of the spacecraft. During the maneuver Mars Global Surveyor happened to catch some high clouds silhouetted against space. Humans have a propensity to see faces and other meaningful shapes in randomly occuring natural patterns, a phenomenon known as pareidolia.

In other Mars news, it appears that Earth is no longer enough for Virgin founder Richard Branson and Google founders Larry Page and Sergey Brin. Their plans for world dominance are now extending out into the solar system with a new venture, Project Virgle, the first permanent human colony on Mars. There's even an application questionnaire. If any of you readers go so far as to submit the 30-second video explaining why you want to live on Mars, send me the Youtube link!

And once you're tired of April Fool's silliness, you can come back to the real Mars for the latest update on the rovers by A. J. S. Rayl.