Here's Ted Stryk's impressions from the Thursday sessions at the Lunar and Planetary Science Conference. --ESL

Thursday morning's sessions included more on the Moon, including work by Phillipe Longonne and others which tried to combine Apollo seismic data with observed Near Earth Object densities in order to accurately characterize the current lunar impact rate. While the work is intended to both characterize the current lunar environment and to help with the dating of unsampled features, the real emphasis seemed to be on the need for a new seismic network to collect better data. 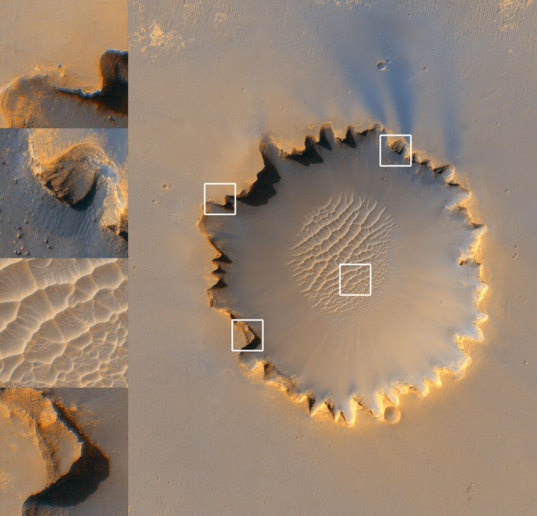 Victoria Crater as observed by the HiRISE instrument on the Mars Reconnaissance Orbiter.

P. E. Geisler demonstrated evidence based on Opportunity's studies in and around Victoria crater that dark wind streaks emanating from such craters are basaltic sands swept up from inside the crater. He also suggested that continued studies of the Mars Exploration Rover tracks, especially those made during the in situ studies of Victoria, will yield helpful new information in understanding the deposition process.

The Cassini RADAR folks presented some nearly global emission maps of Titan, something that should do a lot to help us understand its mysterious surface. [Emission maps use the radio dish to passively receive long-wavelength radiation that emanates from the surface, which differs from the RADAR team's active synthetic aperture radar imaging.] Also, the ISS and VIMS folks had some nice images of Titan's lakes.

The Mars Express MARSIS radar team presented global reflectance maps, something that scientists have long wanted in order to study the surface roughness on various parts of Mars. 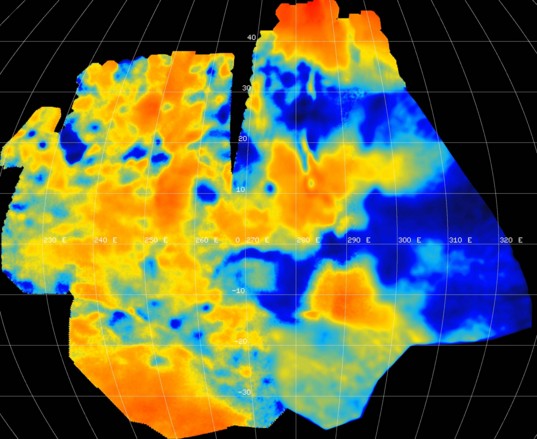 This map of the surface of Venus is a composite of about 1,000 individual Venus Monitoring Camera (VMC) images taken from April to August 2007. The images were taken at an infrared wavelength of 1 micron, at which Venus' atmosphere is somewhat transparent. The colors correspond to the apparent temperature of the surface; blue colors are areas about 40 degrees Celsius (70 degrees Fahrenheit) cooler than red-orange colors. On Venus, as on Earth, cooler temperatures generally prevail at higher elevations; the blue areas correlate with areas of high, mountainous topography, while orange areas correlate to Venus' broad volcanic lowlands. However, some of the variation in apparent temperature could arise from variations in mineralogy across the surface. Venus Express scientists are studying images like these to look for regions that are anomalously warm given their altitude, in the hopes of finding active volcanic centers. It is unknown whether Venus has currently active volcanoes or not.

Alexander Basilevsky presented results from the Venus Monitoring Camera (VMC) aboard Venus Express. When people think of the VMC, they usually think of the ultraviolet views it takes of the Venusian clouds. However, it also has an infrared channel capable of making out surface features at roughly 50-kilometer resolution. The resolution is limited by the scattering effect of the Venusian atmosphere, an effect similar to what plagues Cassini ISS images of Titan's surface.

His results, he said, were "boring." He had used Magellan radar altimetry to model what the surface should look like in infrared. On a very simple level, the warmer something is, the brighter it is in infrared, so the mountaintops, being cooler than their surroundings for the same reason that mountaintops are relatively cold on Earth, appear dark and the plains appear bright. However, just how the temperature should change with altitude is dependent on surface composition. His Magellan-based models presented simulated views based on a multitude of possibilities, and the region he mapped contained everything from low plains to highlands. The VMC images were indistinguishable from one of the simulated images -- the one that showed what the surface should look like if both the highlands and lowlands were pure flood basalt. Hence his use of "boring." Two of the Venera landers measured the surface directly within the region mapped, and the new results are consistent with their compositional measurements. Pretty interesting if you ask me!

There was a poster by Heidi Hammel and Candy Hansen explaining the proposed Argo mission, a New Frontiers class mission to explore Neptune and several Kuiper Belt Objects. It could launch between 2017 and 2019, and would also include a close Jupiter flyby. In addition to the compelling Jovian and Neptunian science, there is a plethora of known Kuiper Belt Objects that would be accessible to Argo, even if it made a close Triton flyby, which is sure to be included. The opportunities are much better than for New Horizons, because Argo has the advantage of being able to use a Neptunian gravity assist to make much greater changes to its trajectory, meaning that many more targets are accessible. Tiny Pluto isn't helpful in that regard. The most encouraging thing is that there was a crowd around the poster for the whole evening, and it seemed to be getting a lot more attention than other missions that are at such a preliminary stage.

Well, there is one more day left of the 2008 Lunar and Planetary Science Conference, and it promises to be every bit as interesting as the last four.