LPSC: A short visit already over

Well, my one full day of attending scientific sessions at the annual Lunar and Planetary Science Conference is now over. I spent the morning attending the session on MESSENGER mission results, and the afternoon jogging back and forth between two meeting rooms to see more MESSENGER presentations interspersed with stuff from the Kaguya moon mission, followed by a few presentations in a session titled: "Outer Planet Satellites: Not Titan, Not Enceladus." It was a lot to take in and I'm sure I'll be digesting my notes for several days -- especially because I'll be spending the next two days visiting family and will consequently not have much time for analyzing my notes -- and during all of this Cassini is diving toward its closest-ever encounter with Enceladus, an event that will culminate in it buzzing the moon at a distance of 50 kilometers at 19:06:12 UTC on March 12, which I must find some time to write about somehow.

One of the highlights of the conference was a large, I'm guessing 50-inch, television screen parked in the main lobby that was showing a continuous loop of high-definition video from Kaguya. The video was clipped into segments, each a minute long, from different days and different orbits, featuring different parts of the Moon. At all times a semicircle of rapt scientists was gathered around the TV screen, oohing and aahing over the sharp images of the lunar landscape passing slowly across the screen. They'd point out features to each other, noticing chains of secondary craters here, collapsed crater rims there, beautiful mottled coloration in this or that lunar mare. 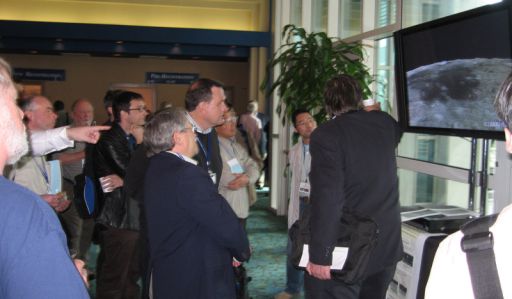 A gaggle of scientists checks out the HD video from Kaguya

Scientists gather in the lobby outside the Lunar and Planetary Science Conference hall to watch high-definition video from the Kaguya mission to the Moon.
Most of these people are not only researchers, but also professors. So nearly all of them wanted the movies to show to their classrooms, and lamented the fact that they were not available on the Internet. Each time I passed by and struck up conversations with them, I tried to tell as many of them as possible that JAXA will make the video available to specific requesters for educational purposes -- so probably nearly every person at LPSC could reasonably make that request. There was even a representative from the Japan Broadcasting Corporation (NHK), Seiji Mitsuhashi, standing by the TV the entire time, who was willing to help people connect to the right personnel to facilitate that request. But I didn't see many non-Japanese conference attendees strike up a conversation with him. I think it's a shame that NHK is not permitting the release of the HD video to the Web; but it's likewise a shame for scientists to fail to take the opportunity afforded by this meeting to make the connection and request the video for their classrooms. If any of you scientists are reading this entry and want to try to request the video, I have Mr. Mitsuhashi's card and will be glad to provide his contact information!