Reporting in from LPSC

This is just a brief post from Houston to say I'm here and covering what I can from the first day of the Lunar and Planetary Science Conference. I've already taken lots of notes on the morning's session on MESSENGER at Mercury. (Here's a program and abstracts for that session in PDF format, about 6 MB.) There's nothing Earth-shattering (Mercury-shattering?) to report from the presentations given so far, but they are beginning to dig in to the details of trying to figure out the history of Mercury's geology from the wonderful new MESSENGER data set. Some of the best news of the morning was in Maria Zuber's talk on the Mercury laser altimeter. That instrument builds up topographic information on Mercury by firing a laser at the surface several times a second and watching for the return flash. They only had one profile on Mercury from the flyby, but during that profile they were able to detect return flashes from angles of up to 70 degrees off of nadir. Let me explain what that means. 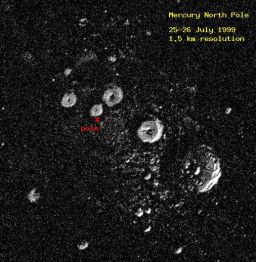 Arecibo Observatory S-band radar image of the north polar region of Mercury. The image measures 450 kilometers (280 miles) on a side. The bright features are bright to radar and could be ice deposits on permanently shadowed crater floors. However, not enough is known about the radar properties of surfaces that have been extremely cold for billions of years for this to be a certain conclusion.
You normally think of a laser or radar altimeter firing straight down to get the best possible reflected signal off the surface -- that would be at an angle of 0 degrees. 70 degrees is nearly at the horizon, and they were still getting measurements. This has really important implications for the extent of the data set they'll get once they're in Mercury orbit, because MESSENGER's orbit at Mercury will be highly elliptical and not quite polar, so that the laser altimeter will really only work well at northern latitudes (where they'll be relatively close to the planet), and there was going to be a gap in their map coverage near the north pole. Maria said that because of the great performance of the instrument demonstrated in their first flyby, they will be able to extend their map coverage right up into the north pole, and down to about 10 degrees south latitude. But wait, there's more: that polar coverage will not only be in the form of altimetry; their instrument measures reflectance too. And there are people who have proposed that extreme polar craters on Mercury may be "cold traps," which never get Sun, which may harbor ice. The implication is that, if there is ice on Mercury's poles, the laser altimeter might be able to detect it.

There's no Internet access available inside the conference halls, so I am not sure when I will be able to post again today -- I may be taking lots of notes and digesting over the course of the next few days. But I'll do my best.

Back to the sessions!