In the fourth installment in my look at one spot on Mars as seen through the eyes of different spacecraft, we finally get to a mission that is still operational: 2001 Mars Odyssey. The highly successful Mars Global Surveyor and Pathfinder, launched in 1996, were followed to Mars in 1998 by a highly unsuccessful pair of missions. Both Mars Climate Orbiter and Mars Polar Lander failed upon arrival in 1999. Like the 1996 and 1998 launch opportunities, 2001 was originally planned to include both an orbiter and a lander, but after the 1999 failures the landed component of the mission was canceled, and 2001 Mars Odyssey was sent to Mars alone. (The 2001 lander was mothballed and did, eventually, get sent to Mars during the 2007 launch opportunity, with an overhauled instrument suite, as the Phoenix lander.) 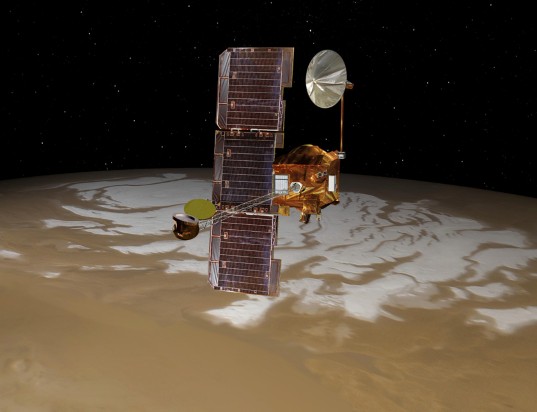 Odyssey joined Mars Global Surveyor at Mars in October 2001, and had aerobraked into its final science orbit by February 2002. When it came to imaging the surface of Mars, the two spacecraft complemented each other very neatly. Mars Global Surveyor, with its high-resolution MOC camera, could resolve objects on the surface down to a few meters across. But high resolution comes at a price: the narrow-angle focus of MOC, which could acquire image strips only three kilometers wide, required the Mars Global Surveyor camera team to pick and choose their imaging targets very carefully, based upon lower-resolution surveys from Viking images. Even after nine years of work at Mars -- more than four times its planned lifetime -- MOC's narrow-angle camera had covered only 5.4% percent of the surface.

Odyssey's imaging instrument, the Thermal Emission Imaging System or THEMIS, could not achieve the high spatial resolution of MOC (and when I say MOC, I mean the MOC narrow-angle camera). But it can do three things MOC couldn't. First, it was designed to see much more of Mars. The goal for Odyssey's primary mission was to image all of Mars, producing global maps of the surface and its rock types; it's the THEMIS data set that provides the base map for the Google Mars application. (That link should send you directly to White Rock, a view giving you context for the higher-resolution views at right.) And each individual THEMIS swath is about 20 kilometers wide, more than 6 times wider than MOC. Seeing a wider area of Mars, even if it's at lower resolution, means that you might catch things that would otherwise be missed, and exactly that happened when THEMIS viewed White Rock.

At right I'm showing a couple of different views of the eastern half of White Rock captured on different dates by THEMIS. The images of the rock itself don't add a lot to what we already knew about its history or composition. But look to the lower right of the rock and you'll see a small crater. On the floor of that small crater are a few tiny little mounds that have the same steep topography and general color of the material found in the White Rock massif several kilometers away. Although these images do not provide conclusive evidence, they strongly suggest that the White Rock material originally filled much more of the floor of Pollack crater, and that what we're seeing today is only a tiny eroded remnant of the original. This is, in fact, what scientists had already concluded about White Rock, but it's always good when a new line of evidence upholds a conclusion arrived at from earlier evidence. It's distressingly common in space science for new evidence to overturn people's theories for how a landscape formed and evolved! It doesn't tell us anything about whether Pollack was once filled with a deposit of windblown or water-laid sediment though.

With more than five years of overlap between Mars Global Surveyor and Odyssey, it was very common for scientists to spot intriguing features in the Odyssey survey images and suggest targets for higher-resolution imaging to the MOC team. The two missions worked in tandem, Odyssey providing areal coverage, and MOC getting the sharp detail. But wait, there's more. THEMIS' second advantage over sharp-eyed MOC is that THEMIS sees Mars in color. And not just the colors that we can see with our own eyes, either. THEMIS is really two instruments in one; its "visible" camera can see three wavelengths that overlap with human color vision, and three slightly longer near-infrared wavelengths, all at a spatial resolution of about 18 meters per pixel. (For comparison, MOC saw Mars at resolutions between 1.5 and 12 meters per pixel.)

THEMIS also has an infrared camera, with 10 channels spanning a broad swath of what's called the thermal infrared. THEMIS-IR operates at about 100 meters per pixel, trading spatial resolution for spectral resolution. Skip down past the end of the visible images and I'll show you what THEMIS' infrared color vision tells us about White Rock.

The four-panel image below is a standard way of viewing THEMIS' infrared data.

These views of White Rock were captured by 2001 Mars Odyssey's THEMIS instrument on March 11, 2002. Together, the four images display all of the available infrared data (visit the THEMIS website glossary entry on DCS for more information).

Not being an infrared spectroscopist, I was at a loss to interpret what these images might mean, so I emailed Arizona State University for help and Steve Ruff replied with an explanation. "The fact that there is no real color showing up in any of the three images of White Rock itself suggests that the spectral character of the material is very bland, which is exactly what we determined from the TES analysis and is consistent with the dust idea." One thing that is distinct, however, is that White Rock actually appears black in the rightmost image. The rightmost image is referred to by the THEMIS team as a "surface temperature image," and it generally indicates cooler areas as being dark and warmer areas as being bright. The dark color of White Rock means that it's cooler in temperature than its surroundings. What does that mean? Read on.

We're coming to the third advantage that THEMIS has over a traditional camera system like MOC: THEMIS can see in the dark. Although purists may argue with me that this is just an extension of its color vision capability, I think most members of the public would be quite surprised to find out that we've sent a night-vision camera to Mars, one that can see the warm glow of its rocks many hours after local sunset. Here's a comparison of what White Rock looks like in the daytime (left) and at night (right). 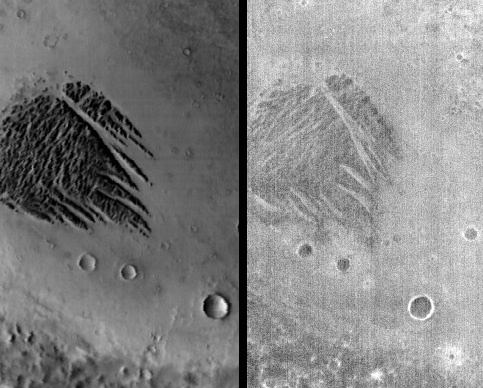 These two views of White Rock were captured by Mars Odyssey's thermal infrared camera during the afternoon (left) and toward the end of the night (right). In the late afternoon, sun-facing walls and rims of craters tend to be warmer (brighter) than shadowed walls and rims, which are darker. White Rock shows up as an anomalously dark (cool) area because of its relatively high albedo; it reflects away a higher proportion of the sunlight that hits it, so it does not warm as much during the day as the much darker floor of the crater in which it sits. At night, the temperature of Mars' surface is controlled more by the composition of the surface. Rocks have higher thermal inertia than dust, and tend to stay warmer for longer. So bedrock tends to show up as bright in nighttime images, while sandy and dusty areas tend to be dark. Crater rims, which likely contain bedrock, do show up as bright in this image, but White Rock itself is relatively dark -- indicating that it is not particularly dense, and is thus not as "rocky" as bedrock.

Thermal infrared images tell us about how something responds to solar heating and then how it cools off at night. The rate at which the surface heats and cools is controlled by its physical makeup. To greatly oversimplify things, rocks are slow to heat and slow to cool, while dust and sand are quick to heat and quick to cool. Since Odyssey's orbit flies the spacecraft over the surface at roughly 5 pm and 5 am local time, its daytime looks at the surface are after a long day of solar heating, and its nighttime looks are after a long night of cooling off in the dark. So, generally speaking, if something is rocky it will look dark in the daytime (because it's still cool from the night) and bright in the nighttime (because it holds on to heat from the day). Dusty materials look bright in the daytime and dark in the nighttime. Daytime images also show you local topography, because slopes that are facing the late afternoon Sun are getting an extra kick of solar heat, while slopes in shadow are cooling off early; nighttime images don't have this topographic effect. (This makes it really easy to tell the difference between daytime and nighttime IR images.)

But White Rock doesn't seem to be following the usual rules -- it's dark both in the daytime and during the nighttime. What gives? Again, Steve Ruff explained things to me. White Rock has high albedo relative to its surroundings, meaning that it reflects away more light than the surrounding crater floor. That, in turn, means it heats up less during the day, making it look dark during the day. But the nighttime image tells the truth about what White Rock is made of. You can see that some areas that likely contain bedrock -- the rims and ejecta blankets of small craters -- appear bright. The floor of Pollack crater, which we already know from MOC images is relatively resistant to erosion, is also relatively bright. Steve said to me, "At night, when albedo has little impact on temperature, it's clear that the thermal inertia [of White Rock] is not that high, lower in fact than most of the floor materials. This again is consistent with the TES results that suggest that, although indurated [cemented], the White Rock material is not very dense."

So Odyssey has given us a more dimensional look at the physical composition of White Rock, but it still can't tell us what exactly White Rock is made of. We've got two more missions to go: Mars Express and Mars Reconnaissance Orbiter. Both missions, currently operating, have high-resolution imaging systems and superb spectrometers. Stay tuned to see how they improve our understanding of this one little spot on Mars.

If you missed the previous installments, here they are: Mariner 9 - Viking - Mars Global Surveyor.