Ulysses to fall silent, its voyage to continue forever

ESA issued a statement on Friday to the effect that the Ulysses mission will soon be ending after more than 17 years in space. The statement finally explains something I didn't understand about the anomaly the spacecraft suffered in January. Back on January 15, mission controllers turned off the main spacecraft transmitter for the first time. Then, when they commanded the transmitter on again, it failed to switch on. I couldn't figure out why they would mess with the spacecraft transmitter after such a long and successful mission. In fact, the very day before the transmitter test, the spacecraft had arrived at the north solar pole, which was heralded by ESA as an important milestone for the mission, because it "coincide[d] with the start of a new cycle of solar activity." I figured they had to have a good reason, but couldn't understand what it might be.

Friday's announcement makes the reason clear. Ulysses depends on radioisotope thermal generators (RTGs) for its power. The spacecraft is launched with a finite amount of radioactive fuel, the decay of which produces heat that the generator converts to electricity. From the moment that the RTG is installed, its power output begins to decay with the decay of its fuel. Now, 17 years after launch, the output of the generator has dropped to the point that Ulysses can no longer power all of its communications, heating, and scientific equipment simultaneously. It was in an effort to conserve power that the mission commanded the main transmitter to be turned off. Using the antenna only occasionally would have allowed ESA to prolong Ulysses' life. Unfortunately, something bad happened in the power systems when the transmitter was switched off. It's not clear to me whether the something bad happened because of the antenna activity or if a preexisting problem was just exposed as a result of the unusual command; but now the power situation is even more serious than it was before.

And as Ulysses is now receding from the Sun (it reached the perihelion, or closest solar approach, of its six-year orbit on August 18, 2007) the heaters are needed more and more to keep its hydrazine fuel from freezing in the fuel lines. The hydrazine will freeze when the spacecraft reaches 2°C. Without hydrazine, the spacecraft cannot maneuver to point its remaining antenna toward Earth.

The loss of the high-rate data transmissions and the impending freezing of its fuel lines mean the end of operations for Ulysses. The spacecraft will likely last only a few more weeks before falling silent. But, like all other defunct spacecraft, Ulysses will continue its journey, circling the Sun once every six years, visiting Jupiter's neighborhood at the far reach of every long orbit. 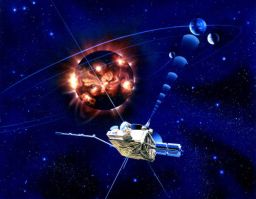 Artist's conception of the Ulysses spacecraft on its first solar south polar pass on June 26, 1994.