Astronomers using the soon-to-be-closed(?) Arecibo observatory announced today the discovery of the first near-Earth object known to be a triple system. Asteroid 153591 (2001 SN263) was first discovered as a mote of light by the LINEAR project on September 19, 2001. Asteroid 153591 (2001 SN263) is now on a relatively close pass by Earth; it'll approach within 10 million kilometers on February 20. (Here's a link to the JPL Near Earth Object Program dynamic orbit diagram.) Arecibo is routinely used to study the shapes and sizes of near-Earth asteroids on close approaches to Earth, and Arecibo radar images of such asteroids have yielded the discoveries of numerous binaries among the near-Earth asteroid population. But this is the first time it's turned up a triple system. The three bodies are 2, 1, and 0.4 kilometers across -- really quite remarkably similar in size. It's hard for me to imagine how such a system would be stable, unless one of the components orbits the others at quite a great distance. The release didn't make it clear what the separation is between the components. 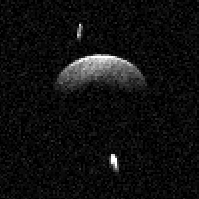 Observing a close pass of asteroid 153591 (2001 SN263) on February 11, 2008, astronomers discovered that it was a triple system. This image from the Arecibo radio telescope shows all three components. The three are rather similar in size: 2, 1, and 0.4 kilometers in diameter.
Although this is the first known triple near-Earth asteroid, there are other triples out there in the solar system. Trivial examples include all the planets except the inner three. Among the asteroids, there are 45 Eugenia (whose smaller components are called Petit-Prince and S/2004 (45) 1), and 87 Sylvia (whose smaller components are called Romulus and Remus). The sizes of the components of these triples are more disparate: Eugenia is 215 kilometers across, while its companions are only 13 and 6; Sylvia is 286 kilometers across, while its companions are about 18 and 7. Among the trans-Neptunian objects, there's one known quadruple (Pluto, Charon, Nix, and Hydra, at 2304, 1212, and roughly 100 and 100 kilometers) and one known triple (2003 EL61 and two companions, at very approximately 1400, 310, and 170 kilometers). I think that astronomers believe multiple systems are quite common in the outer solar system, where encounter speeds are quite low, so it's easier for bodies to be gravitationally captured.