Opportunity watches the clouds drift by

Opportunity is now following a rather leisurely autumn schedule, according to the latest update on the mission website. The rover wakes up briefly in its morning to perform a direct-to-Earth communications session, often snapping some images through the same time. Then it hits the snooze button, rolling over to nap away the rest of the cool morning. Finally, the rover wakes again when the Sun has climbed sufficiently high in the sky to warm the rover and recharge its batteries. Opportunity does its most strenuous work in the middle of the day, doing drives and arm movements. Then it takes a nap, letting the afternoon Sun recharge its batteries.

Late in the afternoon, the rover pokes its head above the covers again to have a chat with Odyssey, whose sun-synchronous orbit takes it over Opportunity's landing site somewhere around 5:00 p.m. local solar time each rover day. (The sun-synchronous orbit means that Odyssey's orbit always stays in the same position with respect to Mars' day-night boundary, so that no matter where Odyssey is over Mars, it's always roughly 5 p.m. or 5 a.m. on the ground.) After sending the day's data hoard to Odyssey, the rover naps again or goes into deep sleep. It's only autumn now so sunlight is relatively plentiful, and the rover is pretty clean, so Opportunity's having no trouble generating the energy necessary for drives and even operating the rock abrasion tool on Meridiani Planum's relatively soft rocks.

Some of the work Opportunity is doing involves staring skyward, looking for patterns in the clouds that pass overhead at this time of year. One of the guys at unmannedspaceflight.com has put together some nifty animations of the wispy cloud patterns, including this one from sol 1,433 (February 4). They're actually moving quite quickly; this animation spans only about 90 seconds.

Opportunity gazed skyward to capture this view of drifting clouds on sol 1,433 (4 February 2008). The four images in this animation were taken about 30 seconds apart, and have all been flat-fielded to remove the effects of the dust that now covers Opportunity's camera windows.

It used to be that you could make such an animation without much effort, but since the dust storm it takes a bit of processing trickery to pull sense out of rover images, especially of such bland targets as the sky. Here's what one of the frames for that animation looked like before "fredk" went to work. 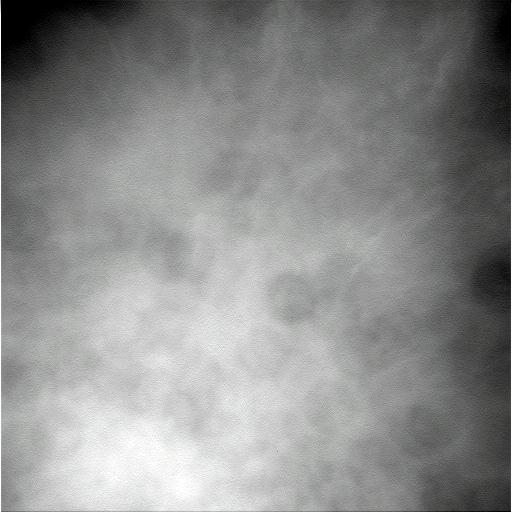 Nearly all of the variation in pixel value across the image is dust. The darkening near the edges results from dust, and every one of the circular blobs occupying the center is a dust mote, seen very much out of focus because of its proximity to the optics. To make the animation, "fredk" first had to average together the four images from the sequence, which cancels out the variations due to the presence of the very faint clouds, making an image that pretty much shows the dust. Then he divided each individual frame by the average image, which cancels out the effects of the dust, leaving behind pixel variations due to the clouds. This is called "flatfielding," and as you can see it's very effective. The rovers frequently take photos of the sky in order to obtain up-to-date flat fields, because the sky is usually very bland, so from such a photo you can get a flat field that works to cancel out the horrible effects of dust on images that contain interesting things like rocks. But sometimes those sky pics turn out to be interesting in themselves.

Meanwhile, over in Gusev crater, there's been a hiatus in official mission updates. But the images show that Spirit's been inching down the slope from Home Plate in order to increase the northward tilt of its solar panels, trying to eke out enough energy to survive the winter. Here's a 3D animation, made from rear hazcam images; it's the rear wheels that are slowly rolling down the slope, while the front wheels remain on top of Home Plate. (You'll need red-blue glasses to see the 3D effect.) It seems the rear hazcams, nestled as they are underneath the rover's body and solar panels, are relatively dust-free. As of sol 1,459 (February 9, 2008), Spirit's tilt was approximately 30 degrees.

Use red-blue glasses to watch the animation in 3D. Over the course of nearly two months, Spirit has been inching its back wheels down from the top of Home Plate in order to increase the northward tilt of its solar panels, compensating for the northward motion of the Sun with the approaching winter.