Atlantis and Columbus embark for the International Space Station

Despite some worries about the weather, the Space Shuttle Atlantis lifted off this afternoon, bound for the International Space Station with the Columbus scientific module aboard. So many of the recent Shuttle missions have sent up this truss or that truss or worked on solar panels or other infrastructure -- at last, our astronauts will install a module that will expand our capability to conduct research in space. Assuming the installation of Columbus goes well, it also will fulfill the major remaining obligation of NASA to Europe on ISS construction. NASA still needs to launch the Japanese research module, Kibo.

Society Executive Director Lou Friedman sent me this message that he asked me to post:

by Lou Friedman
ongratulations to NASA and ESA on the successful launch of the European module on the space shuttle today. The delivery of the Columbus science laboratory is an important milestone, both for the International Space Station (ISS) construction and for international cooperation. Built by the United States, Russia, Europe, Japan, and Canada -- with participation by other countries -- ISS demonstrates how international cooperation can enable massive space projects beyond the economic capabilities of a single nation. We congratulate all involved and express our hope that the new module leads to even greater accomplishments on the station and beyond, extending our human presence to other worlds. 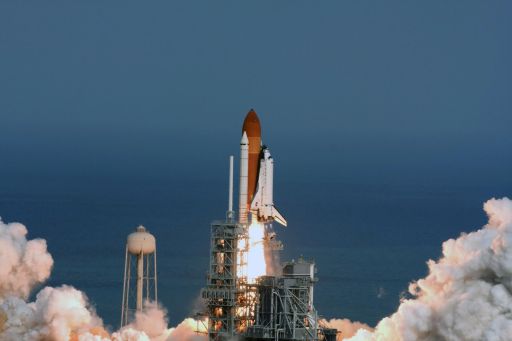 At 2:45 p.m. Eastern time on February 7, 2008, Space Shuttle Atlantis lifted off for the International Space Station from Kennedy Space Center with seven astronauts and the European-built Columbus module.