Have a happy day on Mars

I thought this was a fun image to kick off the weekend: 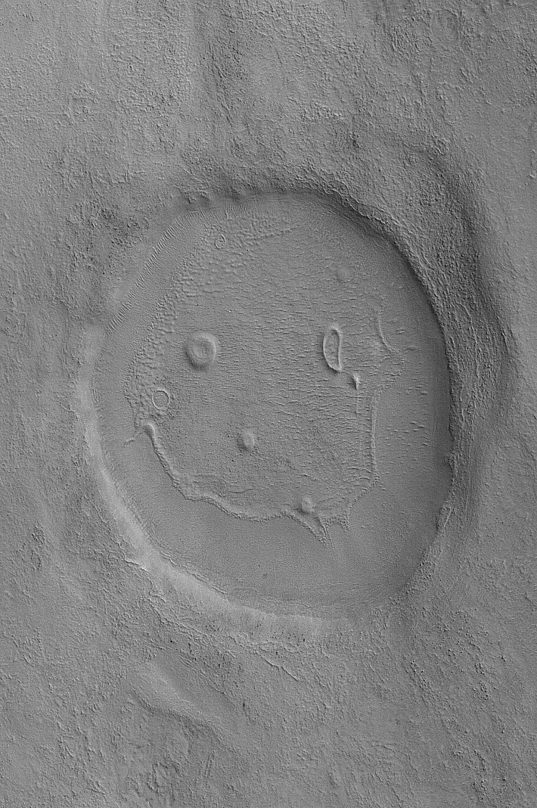 This picture of a crater resembling a "happy face" was acquired by the Context Camera (CTX) on Mars Reconnaissance Orbiter on January 28, 2008. The unnamed crater is about 3 kilometers (1.9 miles) across. It is located among the Nereidum Montes, north of the Argyre basin, near 45.1°S, 55.0°W. North is toward the right and sunlight illuminates the scene from the upper right.

This isn't the first happy-looking crater to be photographed from Mars. A more famous one, otherwise known as Galle crater, has been imaged by Viking, Mars Global Surveyor and by Mars Express (that one made the cover of the March/April 2007 issue of The Planetary Report). But I really like this one; it's more goofy.

Among the tidbits of information included in the Malin Space Science Systems release is the fact that the camera that took this photo -- the Context Camera on Mars Reconnaissance Orbiter -- has now covered more than 20% of Mars at a resolution of 6 meters per pixel, which is quite high; furthermore, they say, they add 1% more of Mars to that total every month. CTX gets overshadowed by HiRISE because HiRISE has such incredible resolution (and because they release at least one captioned image every day, something I have not paid at all enough attention to), but HiRISE will never make a global map the way CTX will. The CTX team is releasing all their data to the public, just like HiRISE is, every three months; you have to get it from the Planetary Data System. There's a bit of a learning curve associated with getting data out of the PDS, but if you really love space exploration it's worth it to try to teach yourself. I've got a couple resources on how space imaging works here, which may help you get started.

Thanks to Ken Edgett for the tip! Ken also reminded me that I should be checking the Malin website weekly for their weather reports from Mars. This week's weather report, accompanied, as always, by a big Quicktime movie showing the past week's weather, said that "The weather this past week on Mars was very active. Several small dust storms were observed throughout much of the south mid- to high-latitudes. Dust storms slightly larger in areal extent than in the southern hemisphere, but fewer in number, formed along the seasonal north polar cap edge, including a storm that went over the permanent (perennial) north polar cap. Water-ice clouds continued to be prominent features in the tropics as well as over the major volcanic regions (e.g., Tharsis, Elysium). The Mars Exploration Rover (MERs) sites remained free of afternoon dust storm activity.