Ride along with Cassini at Saturn!

The Cassini project released today a very cool interactive application that allows you to see Cassini in motion as it orbits Saturn and passes among the moons and rings, called the "Cassini at Saturn Interactive Explorer" or CASSIE. Once you've downloaded and installed it you can pick a couple of options to see Cassini move among the moons, either from Cassini's point of view or from a fixed, wide point of view, and then you can use your mouse to pan and zoom around the system as Cassini and the movies CASSIE makes use of actual mission data on the position and orientation of Cassini as well as Saturn's moons, so what you see as you watch the 3D visualization run is an accurate simulation of where Cassini was pointing at any given point in time. It's pretty fun to play with; I highly recommend downloading it. Although it's based on the detailed mission data, the interface is very simple and appropriate for schoolkids to play with.

Using "Cassini at Saturn Interactive Explorer" (CASSIE) you can observe or ride along with the Cassini spacecraft as it explores Saturn and its moons using real mission data.
A couple of things to watch for as you play, or to point out to any kids who may be watching (most of these refer to the Mission Overview, centered on Saturn): 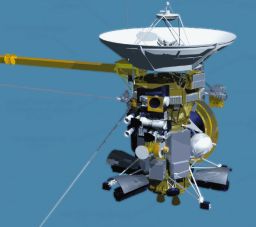 Drawing of the Cassini-Huygens spacecraft

Switching to a view centered on Cassini, let's first orient ourselves to what's on the spacecraft.Go download it and have some fun!