This morning, someone asked me how I arrived at the statement that, prior to the first MESSENGER flyby, Mercury had the largest as-yet-unseen surface area of any body in the solar system. Here's the calculation, which you might challenge your kids to try at home if you're feeling evil. For those of you who haven't finished 8th grade math, you calculate the surface area of a sphere using the formula: area = 4&pi;r2, or, alternatively, &pi; times the square of the diameter. 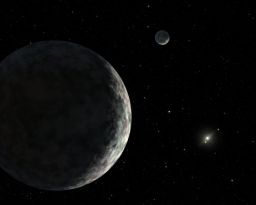 Artist's depiction of Eris and its moon, Dysnomia

We don't actually know what it looks like, because we've never been there..
Okay, what's the next biggest thing in the solar system that we haven't seen? It's good old kicked-Pluto-out-of-planetary-status Eris. Eris is 2,400 kilometers in diameter, give or take, slightly bigger than Pluto (2,306 km) and much much bigger than the biggest asteroid, Ceres (960 km), and also much much bigger than the largest moon of Uranus, Titania (1,578 km). (I'll explain later why Titania is relevant here.)

If you want to be a weenie you can work this out with a calculator and you'll get basically the same result. In other words, Mercury's unseen surface area, 40 M-km2 is more than twice as big as the unseen surface area of Eris, 18 M-km2, the next biggest unseen area in the solar system. Here's the kicker: on this flyby MESSENGER revealed slightly less than half of the as-yet-unseen area of Mercury. That means that even with the first MESSENGER flyby complete, Mercury still has the largest area never seen by spacecraft of any solid body that we've discovered in our solar system.

The other back-of-the-envelope calculation has to do with whether an astronaut would need sunglasses at Mercury. A reader wrote me to complain about the absence of "true color" images released from the MESSENGER flyby, saying he wanted to see what an astronaut would see. That made me wonder whether an astronaut would actually be able to look at Mercury's surface with unshielded eyes (unshielded by anything other than the faceplate of her pressure suit or the window of her spacecraft, of course). I mentioned this in an email chat I was having with Chuck Magee; you can go see his back-of-the-envelope calculations at Lounge of the Lab Lemming. The punch line is that Mercury wouldn't be bright enough to fry an astronaut's eyes, but prolonged staring at its surface could cause "snowblindness."

This would be exacerbated by the utter blackness of the sky -- your eyes would have no way of handling the extreme contrast. Apparently, for this reason, the Apollo astronauts often chose to use sunglasses, and when Apollo 16 astronaut John Young didn't put his on for the ascent from the Moon, he wound up riding into orbit in an almost completely sun-blinded condition. (So space enthusiast Doug Vandorn tells us.)

As for getting "true color" images of Mercury, MESSENGER's wide-angle camera does have the filters necessary to approximate the colors that a human eye would see, but making views that look like what human eyes might see takes very, very, very careful calibration of the data. (I've written about this before.) These being the first images back from MESSENGER at Mercury, you're all going to have to exert a little patience; it may be a long time before the camera has been calibrated well enough to figure out exactly how to combine those filtered images to produce colors akin to what we'd perceive if we were there.