Pluto is still a long, long way away

Today the New Horizons team released an image of Pluto taken from their spacecraft. Even though it has been in space for two years, New Horizons still has seven years to go before its Pluto encounter begins, and Pluto remains a tiny, tiny dot to New Horizons' highest-resolution camera. In fact, with Pluto still 3.6 billion kilometers away, New Horizons cannot even separate the light from Pluto and Charon -- the dot in the middle of the image below represents the combined light of both objects. The caption released with the image says that New Horizons should start being able to separate the two in summer 2010. 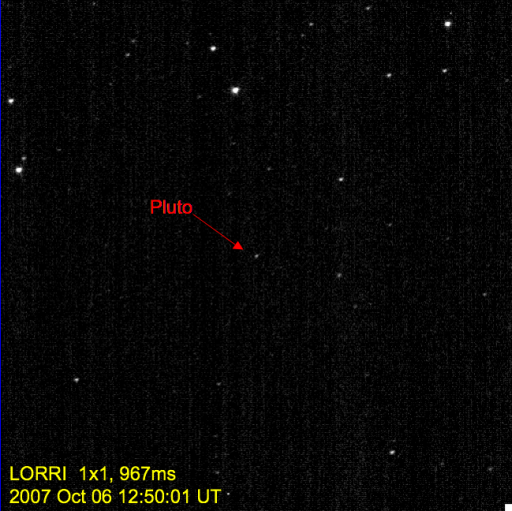 New Horizons took a nearly 1-second exposure to capture this image of a faint Pluto and Charon among a dense field of stars in the constellation Serpens. When the image was taken on October 6, 2007, New Horizons was still 3.6 billion kilometers from Pluto and Charon, too far to resolve any features on their surfaces (or even to resolve the two bodies as separate objects).
(The image was released inverted, with the background white and stars black, something astronomers often do because, the way the human eye works, it's easier to spot faint objects as light gray dots on white backgrounds than as dark gray dots on black backgrounds. However, it can be confusing to non-astronomers to see a picture with white space and black stars so I inverted it, at the risk of losing some detail.)

The significance of this image is that it appears to represent the successful operation of some new flight software that allows LORRI to take long exposures -- before, it was limited to 0.1-second exposures, but now it can keep the shutter open for as long as 0.967 seconds, which greatly increases its ability to spot faint objects. I can think of one use for this capability immediately: spotting New Horizons' eventual targets in the Kuiper belt. The nominal plan for New Horizons is to go on from the Pluto system to future flybys of one or two or, if the gods of orbital dynamics smile upon the mission, more objects in the Kuiper belt. Exactly which objects it will visit has not yet been determined, because they haven't been discovered yet.

Share this story!Send to a friend - Slashdot - Digg - Reddit
Del.icio.us - Newsvine - NowPublic
There's two reasons that the New Horizons team has postponed the search for targets. The main one is that Pluto has lately been in the constellation Sagittarius, which lies in the direction of the center of the galaxy, which means that (at least in our view from Earth) it has been surrounded by lots and lots of stars. Having lots of stars in the background has been great because it has allowed scientists repeatedly to observe occultations of stars by Pluto and Charon, but it makes it extremely difficult for astronomers to spot undiscovered, extremely faint objects in the Kuiper belt. Once Pluto enters a less cluttered region of space as seen from Earth, which will happen some time in 2012, the search will get much easier.

The other reason is that with every passing year, the current position of those as-yet-undiscovered objects that New Horizons might visit gets closer and closer to the future position of New Horizons' trajectory, which is to say that the region of space that we have to search for objects gets smaller and smaller. The smaller the area we have to search, the easier it is to find what we're looking for. Beginning in 2011, it will be feasible for large Earth-based telescopes to start wallpapering New Horizons' possible future region of space with high-resolution images, repeatedly imaging the same region over time to see if any tiny faint dots move with respect to the starry background.

So, starting in 2011, the hunt will be on. That still gives the mission more than three years to find targets, as it won't fly by Pluto and Charon until the summer of 2015. Studying the outer solar system takes patience! When New Horizons will first be able to spot its Kuiper belt targets will depend on how large and how bright they are, but they will certainly be much smaller and hence much fainter than Pluto, meaning that New Horizons must be much closer to them before it'll be able to take its first photos of them. No doubt the imaging technique that permitted this image of Pluto, still 3.6 billion kilometers from New Horizons, will be a valuable tool for the mission, permitting the spacecraft to spot these tiny, faint, slow-moving objects from quite far away.