I just posted a news story on the successful MESSENGER flyby of Mercury, go check it out! They released another couple of images today, both of which are in the story. The one I'm happiest about is that they released the inbound wide-angle camera view of the planet, which forms a bookend to the outbound wide-angle camera view that was the first one returned from the flyby. Together, these two images pretty much show you every piece of Mercury that MESSENGER was able to see throughout this first encounter; this image provides a useful basemap for locating all of the smaller-area (but higher-resolution) narrow-angle camera images that they've been releasing. 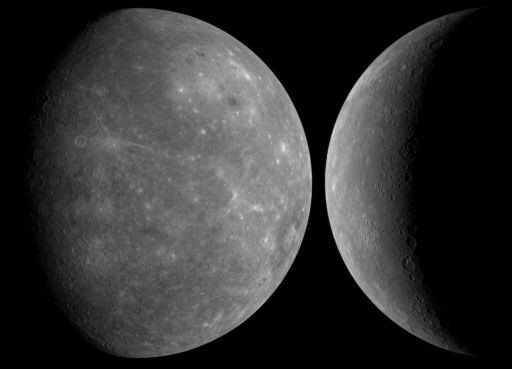 Because of Mercury's very slow rotation, only one hemisphere of Mercury is sunlit during any Mercury flyby. This image shows what areas of Mercury were sunlit during MESSENGER's first flyby of Mercury in January, 2008. Both images were taken with the wide-angle camera. The right-hand image of a crescent Mercury is the inbound view, with the Sun reaching around to the dusk terminator at 275° east longitude. The left-hand image of a gibbous Mercury is MESSENGER's outbound view, with the dawn terminator at 95° east. Topography on Mercury's surface is only visible near the dawn and dusk terminators, where sunlight falls at a slating angle across Mercury's surface, casting long shadows from cliffs. Away from the terminator, topography is lost, but more variations in brightness and darkness (or "albedo") of the surface are revealed.