MESSENGER has (probably) disappeared (but it's coming back)

The demands of my 17-month-old having forced me to stay in California and not travel to Baltimore to witness MESSENGER's first flyby of Mercury live from the science operations center at Johns Hopkins University's Applied Physics Laboratory, the only way I can follow the flyby is to sit at my desk and stare at the timeline, watching the minutes tick past and marking what MESSENGER should be doing now. As I write, at about 10:20 my time (18:20 UTC), MESSENGER has finished all of its approach imaging -- Mercury more than fills its field of view, for both wide- and narrow-angle cameras -- and is warming up its laser altimeter to zap Mercury's surface for one precious topographic profile through closest approach, which is now less than an hour away.

More importantly for those people following along on Earth, MESSENGER is about to disappear; at 18:22 UTC its course is going to take it behind Mercury's eastern edge as seen from Earth, and we're not going to hear from it again until after it comes from behind the western edge, at 19:30 UTC, plus the time it'll take its radio signals to travel the 170 million kilometers currently separating Mercury from Earth. 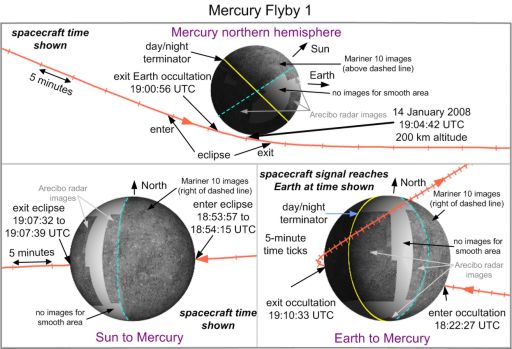 MESSENGER's first flyby of Mercury unfolds on January 14, 2008, with closest approach at 19:04:39 UTC at an altitude of 200 kilometers. These three diagrams show three points of view on the flyby: from the north pole of Mercury (top), from the Sun (lower left), and from Earth (lower right). In all three diagrams, the ticked orange line shows MESSENGER's trajectory (the ticks are five minutes apart); the solid yellow line shows the terminator (day-night boundary); and the dashed blue line indicates the position of the terminator during all three of Mariner 10's flybys.

The top image demonstrates the new views of Mercury that MESSENGER will obtain from the flyby. The area of Mercury above and to the left of the dashed blue line is the hemisphere that was Sunlit for all three Mariner 10 flybys. The other hemisphere has only been partially imaged at much lower resolution by Earth-based radio telescopes. On this flyby, MESSENGER will bale to acquire images of not quite half of the hemisphere unseen by Mariner 10, everything above and to the right of the yellow line, which indicates position of the terminator (day-night boundary) during the flyby.

The bottom left image demonstrates that closest approach of the flyby happens on the night side of Mercury, while the spacecraft is in eclipse (Mercury's bulk blocks the Sun).

The lower right diagram shows that MESSENGER is moving generally toward Earth throughout the flyby. During the closest approach period -- including the entire eclipse period -- MESSENGER will be hidden from view, with no radio communications possible, by Mercury. I'm going to repost my timeline below, to help you all follow along. There is one more new picture, too, but since I've got some time before any more images are released, I'm going to take a little time to play with it before posting.