Mimas and the F ring

This Cassini photo, released today, of the F ring crossing Mimas is from the "just plain cool" department. The F ring is a narrow, dim, dusty, braided thing that orbits Saturn just outside the main A and B rings; the main rings, and Saturn, would be off the screen to the left of this photo. 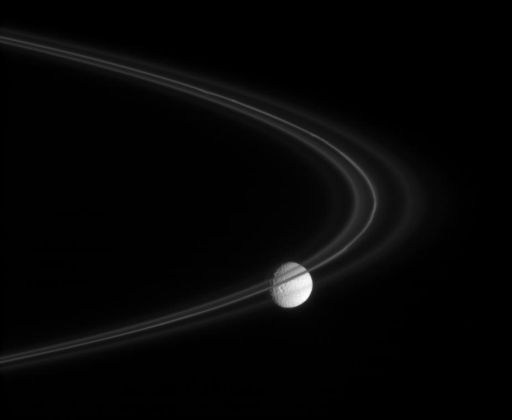 Mimas and the F ring

In this unusual perspective from Cassini, the F ring crosses in front of Saturn's moon Mimas. The two are actually not close to each other in space; Mimas orbits Saturn more than 40,000 kilometers (25,000 miles) beyond the center of the F ring. The view is from the sunlit side of the rings, so the dusty F ring appears dark where it crosses the trailing hemisphere of Mimas. Cassini was 772,000 kilometers (480,000 miles) from Mimas when this image was taken on November 18, 2007.
I think what I like about this image is how it plays with your perceptions of what "bright" and "dark" mean in an image. If you look at the F ring against the blackness of space, its core looks "bright." But if you follow the core across the face of Mimas, which, like most of Saturn's moons, has a surface made primarily of water ice, the F ring core looks "dark." This is an optical illusion; our eyes (or more accurately, our brains) measure contrast in a relative sense, looking out at the world, comparing one thing to another, and determining which things are brighter than other things. Seen against space, the F ring is the brightest thing around, so it looks bright, but where it crosses Mimas, the moon is much much brighter than the F ring, so the F ring looks dark.

I checked the actual brightness of the pixels in Photoshop, to see if it was true that the core of the F ring has the same brightness all the way around, and I got a surprise. Where the F ring crosses space, the pixels have values of around 100 out of 255, which is fairly dark. But where the F ring crosses Mimas, it's actually brighter -- not darker, as my brain is trying to convince me -- with a value of about 120 out of 255; there must be some light from Mimas leaking through the dusty ring, or maybe the image compression bled some light from adjacent areas into the narrow stripe of the F ring. Shows you what my brain knows.