Happy 2008, everyone! With four launches and 20 active missions 2007 will be a tough year to beat, but there are a lot of things to look forward to in 2008. For starters, in just two weeks MESSENGER will fly by Mercury for the first time, seeing terrain never photographed by Mariner 10, and it'll repeat the feat on October 6. Mercury has the biggest surface of anything in the solar system never photographed up close by spacecraft, so that will be a major event, about which I will have much, much, much more to say in the next few weeks. Elsewhere in the solar system, Rosetta will fly by its first small target, the asteroid Steins, on September 5. 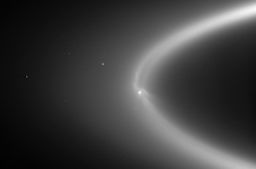 Enceladus and the E ring

With the Sun almost directly behind the view, the tiny moon Enceladus (slightly over 500 kilometers in diameter) is embedded in the E ring, which is created from the material spewed from Enceladus' south polar plumes. The view is down onto Enceladus' north; orbital motion is counterclockwise. The moon itself is the tiny dark spot in the ring; the much larger bright spot is the south polar plume. Some of the complex structure around Enceladus in the E ring results from different orbital speeds of ejected particles: slower particles lag behind (above) Enceladus, and wind up on larger orbits; faster particles stream ahead (below) Enceladus and wind up on smaller orbits. Other structures may result from interactions with Saturn's magnetic field.
Cassini will wrap up its primary mission and orbit smoothly into a two-year mission extension. The biggest events to look forward to at Saturn are four, count them, four incredibly close flybys of the gas-plumed moon Enceladus. There's one on March 12 at just 52 kilometers, passing, as far as I know, right through the edge of the south polar plume. Later in the year, three close flybys come in quick succession, on August 11 (54 kilometers), October 9 (25 kilometers!) and October 31 (200 kilometers). At a distance of 25 kilometers, Cassini's highest resolution camera could, in theory, resolve objects as small as a car sitting on the ground on Enceladus, but in practice I think the spacecraft will be moving so fast that any high-resolution pictures taken at the close approach distance will be blurred. The close approach benefits the particles instruments more than the cameras -- the particles instruments will be hungrily scooping up atoms, ions, and molecules floating in the space near the little moon, trying to figure out what its insides are made of.

Cassini's not the only spacecraft that will reach the end of its primary mission in 2008. So does Venus Express and Mars Reconnaissance Orbiter. Venus Express will, barring any unforseen events, surely be extended; Mars Reconnaissance Orbiter is already planned to continue operation in a "relay" mode, with its prime purpose to serve as a telecommunications satellite for landed missions. However, that doesn't mean they can't keep the cameras and other instruments working. Phoenix will land on Mars in May, while India and the United States both plan to launch spacecraft to the Moon. And the Hubble Space Telescope should see its last servicing mission, extending its lease on life for a few more years.

And then there are the rovers, which have somehow survived four years on Mars. A. J. S. Rayl has just posted a wrapup of what 2007 meant for the rovers, and a prediction of a likely quiet year for Spirit, at least.

I'm likely to take the day off tomorrow; if you'd like more food for your brain, you may enjoy Phil Plait's deconstruction of what "Happy New Year" really means.