Yesterday, the MESSENGER spacecraft sailed past Mercury at an altitude of just 228 kilometers (142 miles) and a relative speed of 5.4 kilometers per second (12,000 miles per hour).  The close encounter provided MESSENGER with the "gravity assist" needed to slow the spacecraft enough that the next time it encounters Mercury, on March 8, 2011, it will be able to enter orbit.  MESSENGER also gathered high-resolution images of half of the remaining 10 percent of the planet that had not before been photographed from spacecraft.  "We are on course to Mercury orbit insertion less than 18 months from now, so we know that we will be returning to Mercury and will be able to observe the innermost planet in exquisite detail," project scientist Sean Solomon said in a statement to the press this morning. 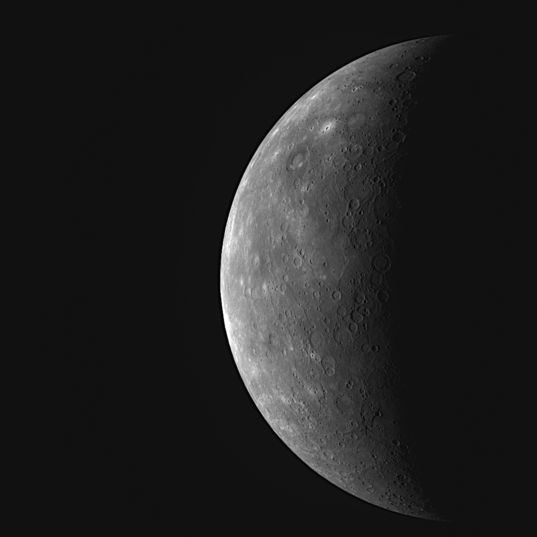 MESSENGER captured this image of Mercury on approach to its third flyby, at about 19:47 on September 29, 2009.

However, just before closest approach, there was a glitch, and the spacecraft entered safe mode.  The spacecraft is now back in normal operating mode and in good health, but the science observations planned for the departure phase of the flyby were missed.

The encounter called for MESSENGER to fly over Mercury's night side, with a crescent phase of the planet visible to the spacecraft on approach.  Fourteen minutes before closest approach, the spacecraft passed into Mercury's shadow, so needed to switch from solar power to its batteries.  Ten minutes after entering the shadow and four minutes before closest approach, mission controllers on the ground unexpectedly lost MESSENGER's radio signal.  At eight minutes after closest approach, the spacecraft passed behind Mercury as seen from Earth, resulting in an expected loss of signal for another 52 minutes.  During that radio blackout, mission controllers worked feverishly to understand the unexplained loss of MESSENGER's signal, and waited on tenterhooks to hear MESSENGER's signal again as it emerged from behind Mercury.

Engineers now know that the loss of signal occurred when the spacecraft autonomously entered "safe mode," a condition in which the spacecraft ceases non-essential operations and turns to Earth to wait for instructions.  "We believe this mode transition was initiated by the on-board fault management system due to an unexpected configuration of the power system during eclipse,” said MESSENGER mission systems engineer Eric Finnegan.  The press statement goes on to say that "MESSENGER was returned to operational mode at 12:30 a.m. [EDT / 0430 UTC] with all systems reporting nominal operations. All on-board stored data were retuned to the ground by early morning and are being analyzed to confirm the full sequence of events."

So the safe mode lasted from 21:51 on September 29 to approximately 04:30 September 30 UTC, resulting in the loss of all post-flyby high-resolution science observations.  But more distant post-flyby science was salvaged, including a hunt for satellites of Mercury that has a 90% chance of uncovering any previously undiscovered moon of the planet down to a diameter of approximately 100 meters.  UPDATE: Although MESSENGER is back in normal operating mode, cautious engineers do not plan to restart science operations until Saturday, October 3.

MESSENGER did successfully perform its inbound imaging campaign, which included images of 5% of Mercury that had never before been seen by spacecraft: 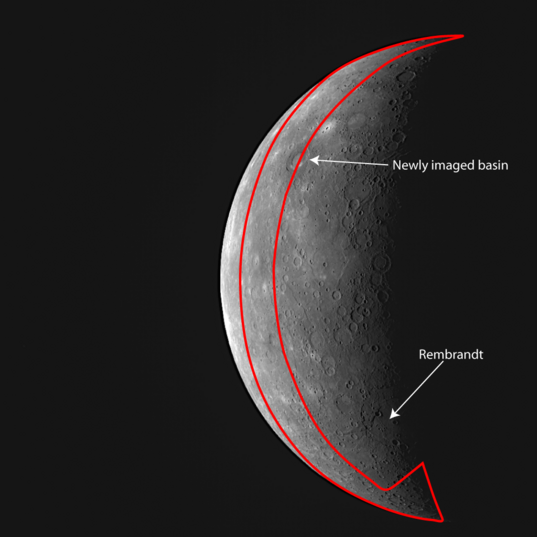 The red line outlines the five percent of Mercury's surface not before imaged by spacecraft. MESSENGER gathered high-resolution images of this region on approach to its third flyby, on September 29, 2009.

Among the images was this one, of a fascinating double-ringed impact basin: 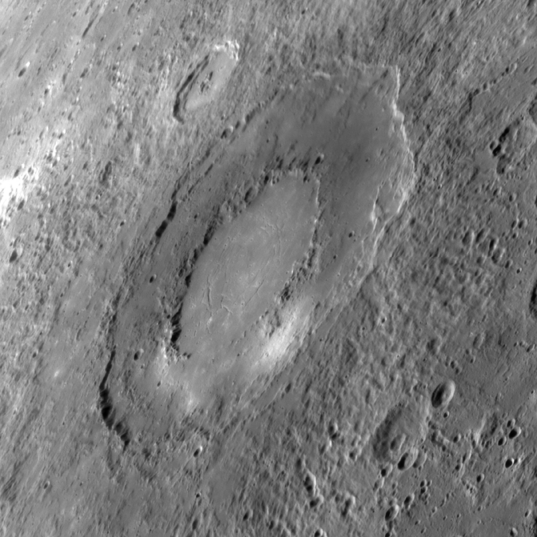 On approach to its third flyby, MESSENGER captured a photo of a double-ring basin only partially imaged during the previous encounter. Craters on Mercury larger than 200 kilometers in diameter tend to be double-ring basins; this one is 260 kilometers across. Originally the basin would have had a rough floor; it is now filled with "smooth plains," likely lava flows. The center of the basin is cut by troughs that are concentric to the crater rim, which are probably tectonic in origin, formed as a result of stresses within Mercury's crust. Such concentric troughs (which form when the crust extends) within craters are rare on Mercury, whose surface tectonics are mostly compressional, resulting from Mercury's entire crust shrinking. The crater was later named Rachmaninoff.