As I mentioned yesterday, Deep Impact is flying by Earth today; as a matter of fact, it has just passed its closest approach (that happened at 19:29 UTC). I wasn't sure whether the Deep Impact team was going to take advantage of the flyby to do any Earth or Moon imaging, the way Rosetta did last month (see also here for the moon image). As a matter of fact, they did take pictures two days ago, and they're already on the ground and released to the public:

Deep Impact took this photo of the Moon with its Medium Resolution Imager as it approached the Earth-Moon system for its December 31, 2007 flyby. The image was taken about two days before the spacecraft's closest approach to earth, at 22:00 on December 29 (UTC). 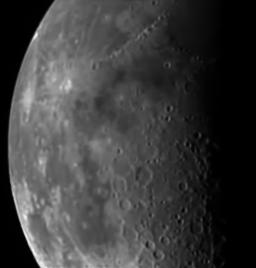 Deep Impact took this photo of the Moon with its High resolution Imager. Since launch, the Deep Impact High Resolution Imager has had an unsolveable problem with its focus, so this image has been processed to reduce blurring. According to the Deep Impact science team, "the calibrated image was post-processed using 20 iterations of a modified Lucy-Richardson deconvolution procedure that includes wavelet noise dampening. The overly bright limb of the moon is the most noticeable artifact of the deconvolution."
I was pleased to see these pictures; I had assumed that there wouldn't be any point, for science or engineering anyway, in Deep Impact taking photos of Earth or the Moon, and that they'd only be taken, if at all, for public outreach purposes. Which is a great reason to turn on your camera, and I'm sure that there was some public outreach motivation behind the images -- that certainly explains why they were released so quickly (and I'd like to thank the team for doing so). However, reading the information that came out with the images, I was quite surprised to learn that the Moon observations made by Deep Impact are actually scientifically important.

Even though the Moon has already been photographed a zillion times, and you can take better pictures of the Moon from Earth than you can with most spacecraft cameras, if your spacecraft happens to be in the neighborhood of Earth (or Mars) it can be quite valuable to take a few pictures. The very fact that Earth, the Moon, and Mars have been so extensively studied by so many spacecraft can make them great calibration targets. What does that mean? Since every spacecraft camera is custom-built for its mission, every camera responds to light in the environment of space slightly differently. If you want to know how photographs of one comet taken by Deep Impact compare in brightness and color to photographs of another comet taken by a different mission, it is really valuable to have images of a well-studied target like the Moon taken by both spacecraft. You can use the well-established properties of the Moon to figure out how you need to adjust your images until they can be exactly compared with calibrated pictures taken by other spacecraft. The same is true for a spacecraft's other remote-sensing instruments, like spectrometers.

I had assumed that the Deep Impact science team already had all the calibration data they needed, since their prime mission is over. However, according to the mission website,

The December 2007 Earth gravity assist provided a unique opportunity for us to calibrate our instruments using the Moon. In particular, the Moon is very useful because it fills the entire field of view of the spectrometer. As planned, we smeared our exposures while scanning across the Moon. The results show that our spacecraft pointing and commanding was spot on. For the first time, either on the ground or in space, we now have uniform data at all wavelengths covering over 90% of the [infrared] detector. We also made measurements which will allow us to cross-calibrate our instruments with telescopic data and, in the very near future, with a wealth of lunar measurements from new orbiting spacecraft. These data will significantly improve the science from EPOCh observations of Earth and the DIXI flyby of comet Hartley 2, as well as from Deep Impact's prime mission to comet Tempel 1. The EPOXI lunar calibration was very successful and nearly three years after launch it sure is nice to get new data from an old friend!

You can find several slides demonstrating the intentionally blurred infrared calibration observations on the mission website. I should explain the acronyms: the original mission is "Deep Impact," but two extended missions were proposed, "Deep Impact Extended Investigation" or DIXI, and "Extrasolar Planet Observation and Characterization" or EPOCh. When both extended missions were funded, the combined extended mission was given the acronym "EPOXI," which as far as I know doesn't actually stand for anything, it's just a merger of the two acronyms and a pun on the word "epoxy," meaning the two were glued into one mission. Personally, I find the use of all these extra names for the mission a little annoying, because I keep having to look them up; the mission will probably always be "Deep Impact" to me.

Anyway, congratulations to the team on a successful flyby!