Another blast from Galileo's past: Europa

Here's another set of Ted Stryk's newly reprocessed versions of Galileo's global shots of Jupiter's icy moons (see my previous post on his Callisto and Amalthea images). These are of Europa, the smallest of the Galilean moons, whose icy surface is fractured and grooved and bumped by internally generated forces. The crisscrossing patterns of the fractures and grooves are an intensely interesting puzzle to geologists trying to figure out what they say about the history of Europa's surface.

Galileo got several global views, but as I was uploading them into the image database, trying to figure out what features they showed, I realized that Galileo mostly viewed Europa's trailing hemisphere, the hemisphere that faces backwards along Europa's orbit. This hemisphere has a reddish stain, and the red color is particularly concentrated along some of Europa's long ridges. It's an interesting part of Europa to be sure, but it's a shame that there isn't a good view of the opposite hemisphere. More stuff for a followup Jupiter mission to do! (Though it occurs to me I really need to dig into the Voyager data set to see what there is on the leading hemisphere -- something I don't have time to do on Christmas Eve.) Here's two nearly full-phase views centered on that trailing hemisphere. 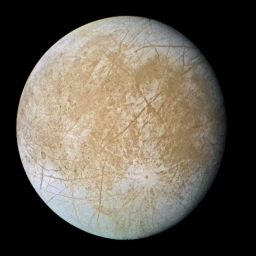 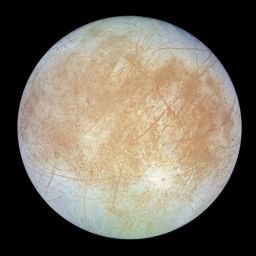 Click to enlarge >
Europa in color: trailing hemisphere
Galileo captured this global view of Europa on its 2nd orbit of Jupiter, on September 7, 1996. The filters used for this image cover a broader range of the spectrum than human eyes can see. Galileo was 678,000 kilometers from Europa when it took this image, at a phase angle of just 2°. Image scale is 6.9 kilometers per pixel. Credit: NASA / JPL / Ted Stryk

Galileo captured this global view of Europa on its 10th orbit of Jupiter, on September 19, 1997. The filters used for this image cover a broader range of the spectrum than human eyes can see. Only the green channel was returned at full resolution; the other color data was returned at half-resolution. Galileo was 725,000 kilometers from Europa when it took this image, at a phase angle of 27°. Image scale is 7.3 kilometers per pixel. The top one Ted considers "the best global shot of Europa no one ever sees." It tends to be true that one or two images end up standing for a planet or moon throughout the Internet, but this short-changes both the missions that produced the images and the worlds themselves, which have much more to show us than one picture can convey. Of course there may be a reason why some of these images haven't been shown -- the data may have been more difficult to work with. In this case, only one of the three images that was required to show Europa in full color was returned at its full resolution; the other two were reduced in resolution before being returned to Earth. On top of that, the full-resolution image was incomplete, so Ted had to reconstruct some of the data by using data from the other two lower-resolution filters, bumping up its resolution, and fiddling with their brightness and contrast to match the color. This is no easy task for Europa, because not only is Europa a relatively colorful place (meaning that an image taken through one filter can have quite a different pattern of bright and dark areas compared to an image taken through a different-color filter), but also because the color of Europa depends in part on what angle the sunlight is coming from.

Here are two more views that swing around to the right (east) of the above views, toward the antijovian hemisphere, the side of Europa that always faces away from Jupiter. Unfortunately, because they are not full-phase, they don't reveal that much new terrain compared to the first two I posted. The first one of them is, however, a really huge global mosaic; if you click to enlarge it you can see a lot of nice topography along the day-night boundary, where slanting sunlight brings low ridges and bumps into relief. 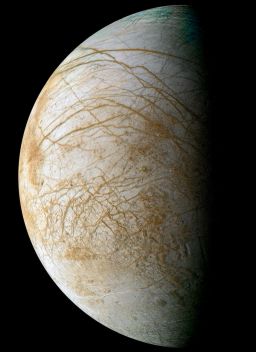 Galileo captured this view of Europa on its 14rd orbit of Jupiter, on March 29, 1998. The image is a mosaic of five different pointings. The filters used for this image cover a broader range of the spectrum than human eyes can see. Galileo was 143,000 kilometers from Europa when it took this image, at a phase angle of 77°. Image scale is 1.5 kilometers per pixel. The area shown is primarily the anti-jovian, trailing hemisphere.
Finally, here's two views that swing the other way, to the left (west) of the global views, showing the subjovian hemisphere. If you were standing anywhere on Europa that you can see in these pictures, Jupiter would always be in your sky overhead -- now that would be quite a view! 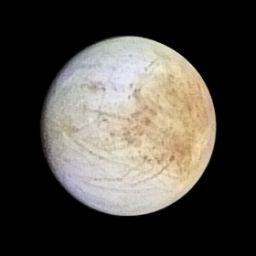 Galileo captured this global view of Europa on its 33rd orbit of Jupiter, on January 18, 2002. The filters used for this image cover a broader range of the spectrum than human eyes can see. Galileo was 1,925,000 kilometers from Europa when it took this image, at a phase angle of 14°. Image scale is 19.5 kilometers per pixel.
Just for fun, I thought I'd toss in a reminder of what New Horizons saw as it flew by the Jupiter system early this year. Once again, the full-phase views are primarily of the trailing hemisphere.