There are five spacecraft at Mars right now, and all of them are returning fabulous images, some of them from multiple images. However, when a person first approaches the Internet to ask for a Mars image, odds are they don't want any pictures from the rovers or Odyssey or Mars Express or Mars Reconnaissance Orbiter because, ironically, those spacecraft are too close to Mars to produce the views they want. What most people want when they search on "Mars" is a nice big fat fully lit photo of the red planet floating in space, and to get that, you have to stand from farther away. The Hubble Space Telescope has been taking such photos for almost a decade, pointing at Mars every opposition, when the distance between Earth and Mars is at a minimum and the planet looms large in the eyepiece. Mars was at opposition, only 88 million kilometers (55 million miles from Earth), two nights ago, so all this month is a great time to be looking for its bright orange glow in the sky. Here's a sky map from spaceweather.com of where Mars will be on Christmas night, above the head of Orion.

And here are the Hubble photos of Mars from the 2007 opposition. Like Earth, Mars is round and it rotates, so if you want to see the whole thing you need to photograph it multiple times. If you're photographing from the surface of Earth it can take a while to cover all of Mars, because Mars rotates at nearly the same rate that Earth does, so if you look up at it at the same time each night, Mars will be showing you nearly the same face every time. You have to wait almost a month for Mars to show you its opposite hemisphere. Fortunately, Hubble doesn't have sunsets and sunrises to deal with, so it could cover the rotation sequence over just a week of observations. Here we go: 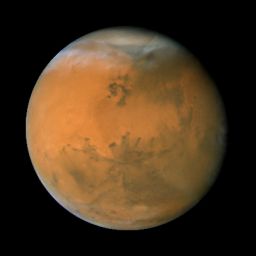 The Hubble Space Telescope took this photo of Mars during its 2007 opposition, when it was about 90 million kilometers from Earth. This view was captured on December 1, 2007 and is centered at a longitude of about 50 degrees.
Along with these four views, they also released this nifty diagram showing how the distance between Earth and Mars during Mars' oppositions has varied over the last 12 years, making the Hubble images of Mars at opposition grow and shrink. 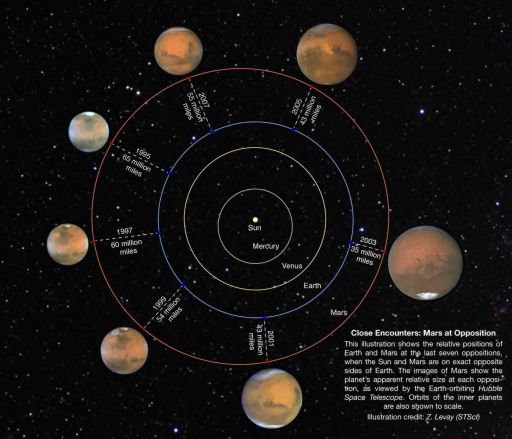 Mars as seen from Hubble during its 1995-2007 oppositions

The distance between Mars and Earth varies greatly as the two planets travel around the Sun. About every two years, as the faster-moving Earth catches up to Mars, the distance is at a minimum, and at every one of these opportunities Hubble has taken photos of the red planet. Because Mars' orbit is noticeably elliptical, the distance between Earth and Mars at each opposition varies widely, so Mars' apparent size also varies widely.