This image juxtaposes two "deck pans" captured by the Pancam instrument on the Mars Exploration Rover Spirit at different times in the mission. On the left is the self-portrait from the top of Husband Hill, when Spirit's deck was nearly as clean as the day the rover landed. On the right is a view taken last month, following the summer's dust storm. Dust from the sky has settled on both the rover deck and the surrounding landscape, coloring the rover the same rust color as the dirt around it. The dust-covered solar cells will not be able to generate as much power as when they were clean. Unless a puff of wind dusts off the solar panels, Spirit may have difficulty surviving the approaching Martian winter. However, the rover team did get practice surviving through periods of very low power during the height of the dust storm, so hopefully those lessons will help them nurse the rover through the winter. 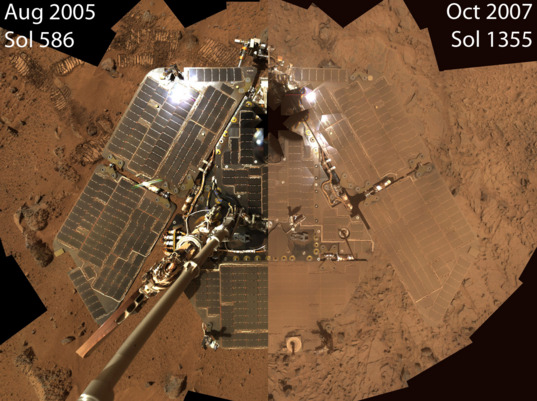 A dusty start to Spirit’s winter