A website called clep.org.cn has been posting new images and data from Chang'e 1 every couple of days. Because it's pretty hard to get these things to show up on Google searches, I have now made a page that will (hopefully) maintain a (reasonably) up-to-date catalog of Chang'e releases:Images and Data from Chang'e 1

I am hoping that some of you who are reading from China will be able to point me to higher-resolution versions of these images, because the ones that are on clep.org.cn are much lower-resolution than Chang'e 1 is capable of, and also because the website unfortunately puts HUGE watermarks across all the images. Still, they're better than nothing. I've done my best to decipher caption information using the Google translator; please don't hesitate to send an email if I've made some translation errors. 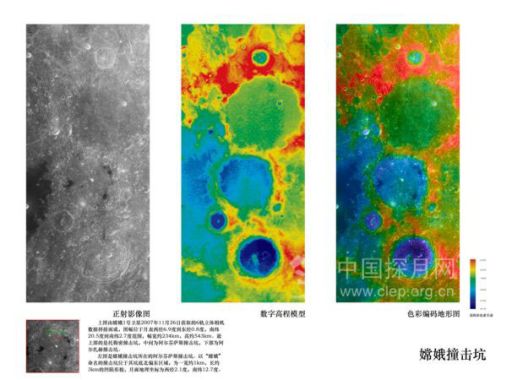 This Chang'e image shows the area around the crater Alphonsus near the center of the lunar nearside. It spans from 0.8 to 6.9°E and from 2.7 to 20.5°S, covering an area about 234 by 543 kilometers in size. Named craters visible include, from the top, Herschel (40 kilometers diameter); flat-floored Ptolemaeus (164 km); Alphonsus (108 km); slightly to the left, Alpetragius (39 km); and Arzachel (96 km). For comparison, view Lunar Orbiter images IV-108-H2 and IV-108-H3.
To explain what is going on in this image: remember that Chang'e 1's camera is actually three cameras that shoot photos of the same areas on the Moon from slightly different angles. One of the photos is shown in the leftmost frame, of a familiar area near the center of the near side of the Moon. The three different-look-angle photos can be used to calculate a digital elevation model (DEM) of the topography in the scene, which is shown in color at the center of the slide; blues represent lower elevations, yellows and reds higher elevations. Finally, the third panel shows the DEM overlaid on the photo. You may notice that the photo is a bit hard to interpret, because there aren't many shadows; the Sun must have been nearly behind the spacecraft when the image was taken.

Here's another three-image set from the far side: 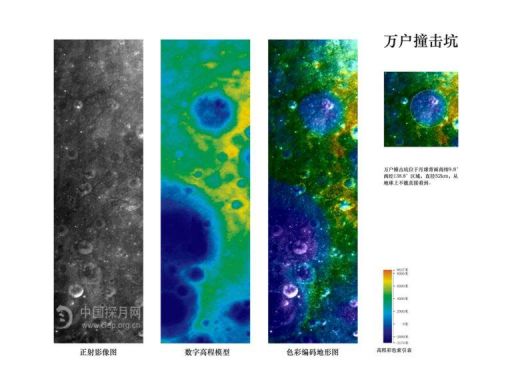 Chang'e 1 image and DEM from the farside

This area of the lunar farside has many small, overlapping impact craters. Chang'e 1's ability to acquire 3-D images can reveal craters that are not directly visible in photographs; one such crater, 52 kilometers in diameter, is visible as a blue hole in this image from the lunar farside. The crater is centered at 9.8°S, 138.8 °W.
There's one more image from that website that I'd like to post, but I am hoping some nice Chinese reader will locate it at a higher resolution before I do.

Finally, one nice reader did point me to a very high-resolution version of the 3D view of the first image released by Chang'e 1. Enjoy! 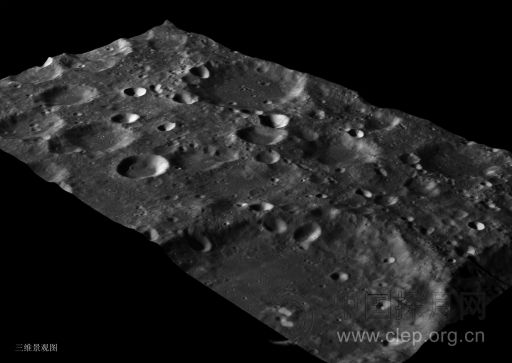 Chang'e's camera simultaneously shoots three images along the spacecraft's track. The multiple look angles allow the calculation of digital elevation models of the lunar terrain. This is a perspective view of the first image released by the Chang'e 1 mission.