Voyager in the Kitchen Sink

Last year at the International Space Development Conference I saw a talk given by Voyager Project Scientist Ed Stone on the Voyager Interstellar mission, in which I enthused about a visual analogy he made to explain the different parts of the space environment being explored by the Voyager spacecraft. During today's press conference on Voyager 2 reaching the termination shock (which you can read about through that link to an article by A. J. S. Rayl), he showed the video again, and the American Geophysical Union was kind enough to post it on their website. You can watch the video here; the image below is a still. 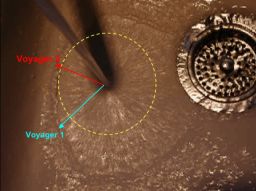 The Voyagers' journey in a kitchen sink

Voyager project scientist Ed Stone captured a video of water in his kitchen sink (AVI format, 2.1 MB) as a visual analogy for the plasma environments encountered by the Voyagers.
As I wrote last year, in the movie you can see a fast column of water from the kitchen tap (off screen) falling onto the flat stainless steel floor of the sink. When it hit the sink, the water spread out in all directions, making a circular area around the column of falling water that was striated from the column to the edges. "This is the area of supersonic flow," he said (I'm paraphrasing here). "The lineations there show you that the water is flowing faster than the speed of the waves on the top of the water. Notice how thin it is, how fast it's flowing." This part is analogous to the interior of the heliosphere, where the solar wind flows supersonically in all directions from the Sun. Returning to the sink, at the periphery of that circular region, suddenly the water piles up in a burbly boundary around the circle of supersonic flow. "That's where the flow transitions from supersonic to subsonic. It's not a gradual transition; it happens suddenly, and the water piles up there." That's analogous to the "heliosheath," and the boundary between the fast flow of water and the piled-up, slow flow of water is analogous to the "termination shock." Ed pointed out that the water in the "sheath" area was flowing slowly around the edges, falling eventually into the sink drain -- just like the particles in our Sun's heliosheath are swept around and behind us by the flow of particles in interstellar space. Go try it at home. Watching that part of his talk was one of those light-bulb moments for me -- now I get it! 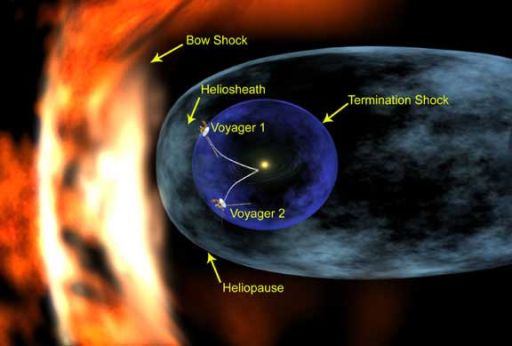 Voyagers at the edge of the solar system

Our solar system exists inside a heliosphere, a bubble created by the outward flow of the solar wind. The region that separates our system from interstellar space is the heliopause. In between these is the termination shock, where the solar wind slows from supersonic to subsonic speeds.