"Return of the Falcon," a new animation of the Hayabusa mission

JAXA has released a 30-minute video of the Hayabusa mission, "Return of the Falcon," combining computer animation with actual footage of the construction and launch as well as images from the spacecraft of Itokawa. It takes a while to download but is worth a watch. The video is set to the smooth jazz sounds of Emiko Kai, composed before the launch of Hayabusa (then named MUSES-C) to express "people's interest, hope, and support for a successful flight. The music represents the hopes of all people supporting the mission as though it represented a Muse gently watching over the challenges of a boy named 'Hayabusa.'"

The animation opens with the spacecraft tumbling, lost in space, foreshadowing the frightening period of no contact with Hayabusa in December 2005 and January 2006. Then it goes on to show the construction, launch, and early cruise. The piano bar music captures the leisurely feel of cruise; it's a lonely bar, though, with Hayabusa the only customer, hanging out in black space, circling the Sun. The video shows the 2004 flyby of Earth, including the brief period of darkness for the spacecraft as it flies through Earth's shadow -- neat.

The music picks up a little bit as Hayabusa locates Itokawa and begins its dance with the otter-shaped asteroid; the film switches between actual views taken by Hayabusa and animations based on the shape model derived by Hayabusa, including lots of neat sequences of Hayabusa's shadow crossing Itokawa's face. As the animation goes into the various landing attempts, though, the music seems out of place. Composed before the mission started, it has a smooth, hopeful, even exuberant tone that does not match the tense and difficult approach maneuvers.

The animations of those maneuvers are really cool, though. They are firmly rooted in reality, based upon actual telemetry from the spacecraft, showing Hayabusa's tricky, tricky attempts to approach a jagged, irregular, spinning body in microgravity. The animation of the first landing attempt is particularly gripping; the spacecraft aborts its attempt but continues to descend, and bounces off the surface, careening sideways, two of its four laser range finders firing off into space, and finally comes in for a tilted landing, leaning on one solar panel. It rests in this Not Good position for half an hour before being commanded from Earth to take off. By comparison, the second landing attempt seems to go in textbook fashion, but it was on this second attempt that the spacecraft suffered the damage to its fuel lines that may, ultimately, prevent its return to Earth. 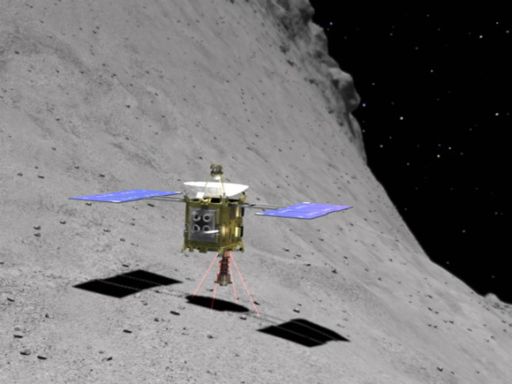 In this still from the movie "Return of the Falcon," Hayabusa is shown just before its first landing on Itokawa, just before it bounced off the surface. The red lines are its four laser range finders; its sampling horn points toward the surface. 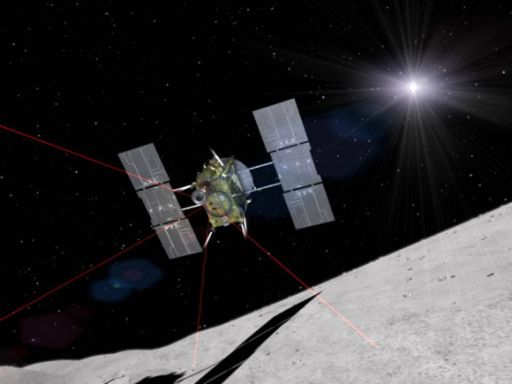 During the first landing attempt Hayabusa bounced off of Itokawa, tilting sideways. 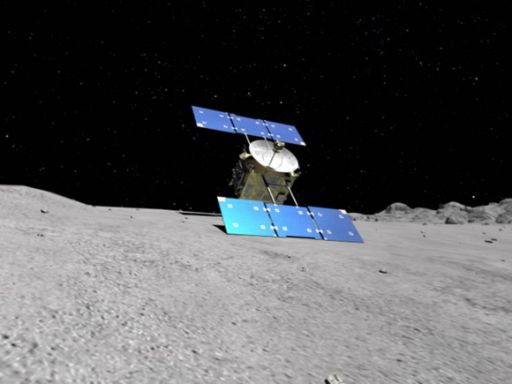 Hayabusa re-contacted the surface, landing on the sampling horn and one solar panel, and remained in this position, baking in the sun, for half an hour before being commanded to lift off. 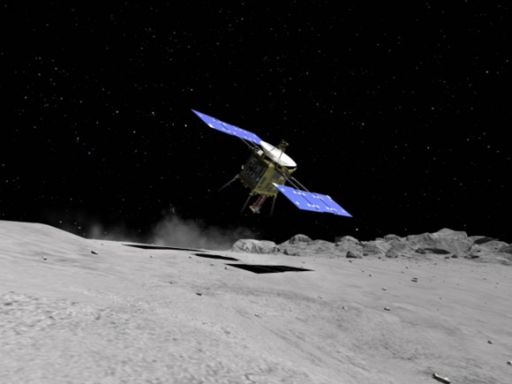 (All these stills are from a much larger gallery of images posted by the film's production company.)

The video shows all the major events of the science encounter, including the firing of two target markers and the Minerva hopper. Minerva missed a landing on Itokawa, sadly, but it did apparently turn back and catch a photo of Hayabusa's solar panel, an image I had not seen before. 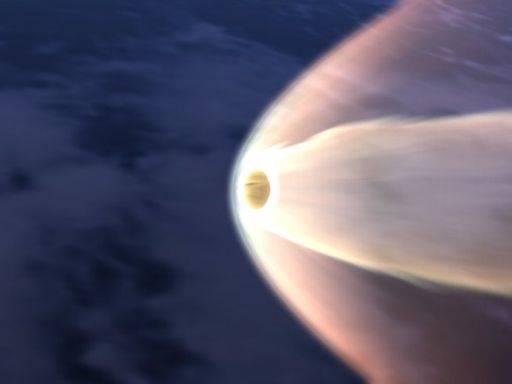 Hayabusa: return of the sample capsule

The sample capsule glows as it streaks through Earth's atmosphere toward its landing in June 2010. 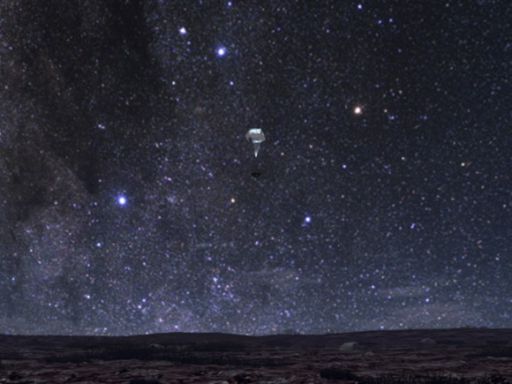 The sample capsule descends under a parachute toward the Australian desert.

The video is about 28 minutes long and is followed by lengthy credits. After the technical credits, pleasantly, are extended credits listing all the mission's team members -- engineers, scientists, and all. Japanese team members' names are written in kanji. I can't read the kanji of course but I wouldn't know the names anyway; that doesn't really matter. Seeing the hundreds of names scrolling by gives you a sense of how many individuals contributed to making this one spacecraft fly. At the very end, credit is given to "All of the people of the world who have supported Hayabusa." On behalf of some of those people, I say, thank you to JAXA, for letting us come along for the ride!

Throughout the movie the spacecraft is given an inner voice and personality through subtitles, something that would never be done in a similar movie by NASA or ESA. And, granted, it's a little sloppy to give personality to machines. But I applaud JAXA for inviting the public to have not just an intellectual attachment but also an emotional involvement in the "lives" of their robotic emissaries into interplanetary space. You can be sure that the men and women who were listed in those credits have felt plenty of emotion through the successes and setbacks experienced throughout Hayabusa's long -- and continuing -- journey. That's part of the thrill of space exploration, and I wish more members of the public felt such an attachment to the machines that now explore where we weak humans cannot.