Seeing Earth rise and set from the Moon

A reader wrote me to comment that the press release associated with Kaguya's pictures of Earthrise and Earthset contained a couple of inaccuracies that have since been repeated around the Internet. The fist is that Apollo 8 was not the first mission to image an Earthrise over the Moon -- the first was Lunar Orbiter 1 in 1966. There is a new and absolutely wonderful online archive of Lunar Orbiter images at the Lunar and Planetary Institute, so I went there to dig out these photos. Lunar Orbiter shot its images by scanning onto film that was developed inside the spacecraft, and then scanned line by line and returned to Earth as, I believe, an analog signal; you can see the striping of the original film strips on every image. Each Lunar Orbiter image has a medium-resolution context view, with a strip of three high-resolution views down the middle. Here's the medium- and then high-resolution views of the first-ever Earthrise over the Moon. 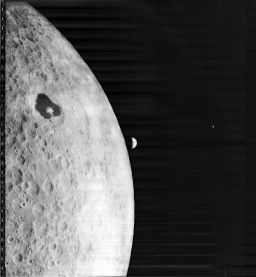 First image of Earthrise over the Moon

Lunar Orbiter 1 was the first spacecraft to capture an image of Earth rising over the lunar limb, in 1966. A higher-resolution version of this image can be downloaded from the Lunar and Planetary Institute's Lunar Orbiter Photo Gallery.
(However, I think you can't argue with the fact that the Apollo 8 Earthrise image, broadcast live on TV on Christmas Eve 1968 was the one that has the most cultural resonance.) His other comment had to do with the idea of whether you can see Earthrise and Earthset on the Moon. The Moon is in a 1:1 spin-orbit resonance -- it rotates exactly once for every revolution about the Earth -- which is why we always see one face of the Moon, the nearside, and never see the farside. Turning this around, an observer standing on the Moon would always see Earth in the same spot in the sky, sitting up there and going through phases once a month like the Moon does, but rotating once a day to show different continents to the Moon. (What an odd sky sight that would be to future lunar settlers!) However, the Moon's orbit is not quite circular, which means sometimes it moves faster in its orbit than at other times, which means sometimes its rotation lags its revolution, and sometimes its rotation goes a bit faster than its revolution, so that the Moon actually nods back and forth a bit in longitude over the course of a month. Here's a lovely photographic illustration of that:

Visit Laurent Laveder's website for the full-resolution version. This animation is composed of 20 photographs of all of the full Moons from May 2005 to December 2006. The Moon appears to shrink and enlarge and wobble back and forth because its orbit around Earth is inclined and elliptical. The Moon appears smaller when it is farther from the Earth (at apoapsis) and larger when it is closer (at periapsis). The wobbling -- known as nutation -- results from the fact that the Moon travels slower near apoapsis than periapsis, while its rotation rate is constant. The wobbling permits Earthly viewers to peek over the eastern and western limbs over the course of a month. The orbit's inclination gives us views over the north and south poles, depending on how high the Moon rises in the sky. The Moon's nutation means that a total of 59 percent of the lunar surface is visible from Earth over the course of each month.
Now, imagine that you live at a point on the Moon that is on the border between the nearside and the farside. Because of this longitudinal nodding, you would actually see an Earthrise and an Earthset once a month, with the Earth making a loop around its average position in the sky. Resonant orbits make for neat stuff in the night sky.