That's no near-Earth object, it's a spaceship!

Whenever I am out at night with my husband and I point to the sky and say, "that's Venus" or "look, that's Saturn, see how yellow it is," he likes to burst my bubble by saying "no, it's just a plane." Every great once in a while, I'm sad to say, he's right.

Well, a similar scenario has just unfolded within the near-Earth asteroid community. On November 8 the Minor Planet Center issued a routine Minor Planet Electronic Circular, reporting on observations of a newly discovered object, newly designated 2007 VN84. Several observatories had spotted the faint object, and, based upon those observations, an orbital trajectory was calculated, which placed the object on a very close path by Earth, "0.000081 AU (1.89 Earth radii) on Nov 13.844 UT." Now, that 1.89 Earth radii is measured relative to Earth's center, meaning that the thing was going to fly within 6,000 kilometers of Earth on November 13 at 20:15 UTC. That's pretty close! This is a truly near-Earth object. 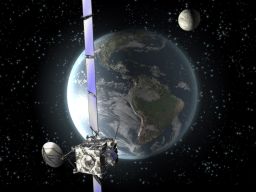 Rosetta's second Earth flyby is due to take place Closest approach will take place on 13 November 2007 at 20:57 UTC, at which time Rosetta will speed past at 45,000 km/h (about 12.5 km/s) relative to Earth. At this time, Rosetta will be 5,301 km above the Pacific Ocean, south-west of Chile, at 63° 46' south and 74° 35' west.
But a sharp-eyed reader of the MPECs, Denis Denisenko, realized that there was something going on. I'm not sure what tipped him off; whether he noticed that specific date and time and remembered another significant event to happen on that day, or whether he has a habit of checking near-Earth object trajectories against catalogs of manmade objects. However the discovery happened, he realized that 2007 VN84 had a trajectory that was awfully similar to Rosetta, which is due to swing by Earth on November 13 at 20:57 UTC. He posted as much to the Minor Planet Mailing List.

Indeed, today, the Minor Planet Center issued an Editorial Notice stating that further investigation has shown that the object briefly designated 2007 VN84 is, in fact, the Rosetta spacecraft, and that the designation "2007 VN84" will be retired. The editorial notice goes on to say, with notable asperity, "This incident, along with previous NEOCP postings of the WMAP spacecraft, highlights the deplorable state of availability of positional information on distant artificial objects.... A single source for information on all distant artificial objects would be very desirable."

I think it's pretty funny that a very big spacecraft designed to study minor planets in the solar system has itself, however briefly, been named among the minor planets. This episode also goes to show how sensitive our detection capability is. Rosetta is a pretty reflective object, but it's also quite small when compared to near-Earth objects that could do us any damage. And here we had at least several days' warning of this small object's approach. It's actually comforting to me, in a way; it seems that there is now no way we can have less than a few weeks' warning of the approach of an object large enough to do us some harm. Bad things may happen if such an object hits, but that's enough time to get a lot of people out of harm's way.

Of course, all this hubbub is occasioned by Rosetta's upcoming flyby. The Rosetta Blog has some updates, including the nice detail that no further trajectory correction maneuvers are necessary, which bodes well for them accomplishing the acquisition of science data during the flyby.