The Arecibo radio telescope is a unique facility. The largest radio telescope in the world, Arecibo has been in operation for more than 30 productive years, mapping the heavens and the nearby planets in radio wavelengths, searching for extraterrestrial signals, and determining the orbits of small but potentially deadly near-Earth objects. But unless something changes, Arecibo will soon be closed, not because it's going to be supplanted by better instruments (it isn't), but because two federal agencies are playing chicken with it.

Arecibo has always been funded in part by the National Science Foundation. But NSF considers near-Earth objects to be NASA's problem and no longer wants to fund such observations. NASA, on the other hand, doesn't want to fund what it considers to be an NSF program. If neither agency ponies up the few million dollars a year necessary to keep it open beyond 2011, it will be closed.

There was a Congressional hearing on the status of the near-Earth object survey this morning, at which radio astronomer Don Campbell planned to bring up the role of Arecibo in determining the orbits and physical characteristics of potentially hazardous objects. In support of this hearing, The Planetary Society issued a letter to Congress stating (in part): "The Planetary Society has no position on whether this should be a NSF program or a NASA program; but, we strongly feel that it should be an American program with congressional support. We urge you to provide such support to keep the Arecibo planetary radar operating." Those of you who can vote in the U.S., please take a moment to email your representatives to ask that they charge someone with supporting Arecibo. (Note: the last time I did this, I got form replies from my reps saying they didn't read third-party-sent emails anymore. It's worth taking the time to go to your reps' own web pages, where they usually have comment forms you can fill out.)

Arecibo is too unique -- and cost-effective -- a facility to lose, and it would be stupid for it to be a casualty of a game of chicken between two federal agencies. 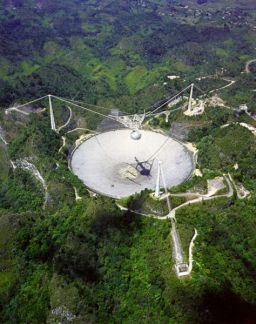 NAIC - Arecibo Observatory, a facility of the NSF

The 300-meter (1,000-foot) dish of the Arecibo Radio Telescope in Arecibo, Puerto Rico, the largest in the world.