First HD movies from the Moon

JAXA just released a movie (actually, two separate movies) shot from the Kaguya orbiter as it cruised 100 kilometers over the Moon from the south to the north. Little lumps on the horizon resolve into the dish shapes of craters that expand as they approach the viewer, then disappear underneath. The first sequence shows a mare area, the west edge of Oceanus Procellarum, lit high by the Sun, emphasizing the brightness differences between dark mare material and bright highlands material. The second sequence shows much rougher terrain near the north pole, lit at a lower angle that brings out dramatic shadows. And at the end, Kaguya crosses the terminator to the dark side of the Moon, its night side. (It's a common misconception, perhaps because of the Pink Floyd album and song of the same name, that the Moon has a permanent dark side. It doesn't; every part of the Moon sees days and nights just like every part of Earth does. The Moon does have a far side, the side that faces away from Earth, which we can only see by sending spacecraft there.)

The movie is really beautiful, even if it's not shown at its full HD resolution. Here are a couple of stills: 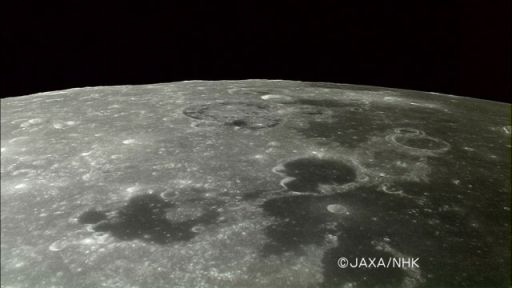 HDTV image of the Moon from Kaguya

This is a still from the first high-definition movie shot from a spacecraft beyond Earth orbit. Kaguya was in a 100-kilometer-altitude polar orbit around the Moon on October 31, 2007 when it captured the movie. This frame shows some of the smooth lava-filled plains at the western edge of Oceanus Procellarum on the lunar nearside. The movie, which runs eight times faster than real time, can be viewed here.
could see this movie being used as a backdrop to movies, TV shows, or commercials, which may not seem like the most honorable place for it to end up. But it's terribly important for space images -- real images really shot in space and not made up on a computer -- to make their way into popular media, where they will become part of our culture. The Moon is a round world, we can visit it with spacecraft, fly over it like an airplane over the Earth, see a changing landscape, and maybe someday, zoom in to a landing site or even that permanent moon base that seemed so possible in the 1960s.