At 03:37 UTC today, Chinese mission controllers successfully commanded the Chang'e 1 spacecraft into lunar orbit, according to chinaview.cn. There are now two spacecraft orbiting the Moon, Chang'e 1 and Kaguya, and China is now a member of the very small club of nations who have built something and launched it to another world. Congratulations to China! 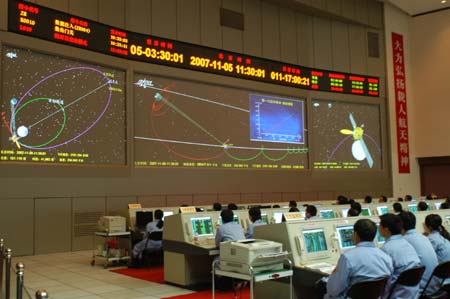 Mission controllers at the Beijing Aerospace Control Center guided China's first satellite to leave Earth, Chang'e 1, into lunar orbit on November 5, 2007.
I didn't see any other siginificant news on that site to report. While I'm talking about the lunar missions though, I'll also mention that Kaguya continues to report successes; you can download a presentation (PDF format) that shows more images taken by the onboard camera, documenting successful deployments of several science instruments: the lunar magnetometer extended its 12-meter-long mast; the lunar radar sounder extended four 15-meter antennas; and the Upper Atmosphere and Plasma Imager, UPI, was deployed on its gimbal. I'm still waiting to see what Kaguya's vaunted HD camera will send back from the Moon!