Comet 17P/Holmes is getting bigger every day

Since its million-fold brightening on October 24, comet 17P/Holmes has continued to excite observers, its coma getting larger and brighter every day. Now it is reportedly as bright as the stars of the Big Dipper and clearly non-stellar even to the naked eye. Its appearance should only improve over the next few days as the Moon rises later and later. The comet has, so far, no obvious tail, but some astrophotographers are beginning to see a faint tail develop. As always, spaceweather.com is a great place to find -- or submit -- photos of exciting current events in the sky. Here's a couple favorites that I plucked from there today: 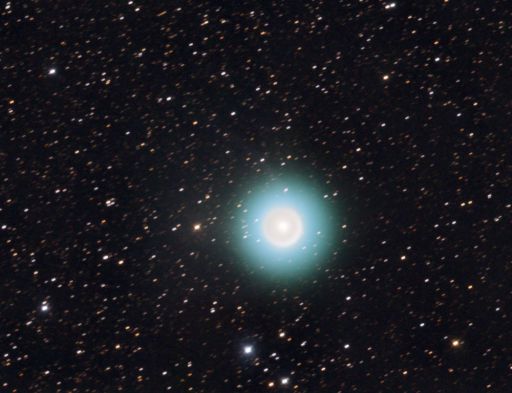 Walker says: "I decided to take many short exposures to try to detect any hint of an Ion tail, rather than concentrating my efforts on the bright pseudo-nucleus. Success! Note the faint, diffuse tail trailing off to the upper-left in this image. 108mm f/4 astrograph, SBIG ST-10XE CCD Camera. 21 minutes of red, green, and blue filtered exposures each."
And check out this cool video showing three days of the comet's activity.

Even if it's now a naked-eye comet and "easy to find if you know what Perseus is supposed to look like," if you're a complete dummy about the night sky like me and don't know what Perseus is supposed to look like, you'll need help locating it. I found a good article on skyandtelescope.com explaining how to locate it by beginning with Cassiopeia, which is one of the four or five constellations I can actually recognize. Now all I have to do is lodge a memory in a parenthood-addled brain to go out and look for it tonight!