A press release issued by the European Southern Observatory on Friday described "a widespread and persistent morning drizzle of methane over the western foothills of Titan's major continent, Xanadu." The release was titled "Take an umbrella if you plan to visit Titan!" which is cute, but you need a lot more than an umbrella to visit Saturn's moon Titan! Don't forget oxygen and a suit that can project you against temperatures of minus 183 Celsius (minus 300 Fahrenheit), but I suppose you can leave your pressure suit at home, as the surface air pressure is only 60% more than Earth's, not too uncomfortable.

Anyway, the release had to do with an article recently published in Science Express by Máté Ádámkovics and several coauthors, "Widespread morning drizzle on Titan," which discusses some neat processing tricks performed on infrared images taken at the Very Large Telescope and Keck to retrieve information about the distribution of liquid and solid methane drizzle and clouds in Titan's atmosphere. As I'm not an atmospheric scientist or an infrared astronomer I got a little bit lost in the details of how their tricky processing worked, but here's my attempt at a simplified version. Images taken in different wavelengths probe to different levels in the atmosphere; if they're taken in "methane windows," they can see to the surface, but if they're taken on the edges of these windows, they represent radiation that got only penetrates partway through the atmosphere. By subtracting images taken at different wavelengths, you can remove the effects of the surface or upper atmosphere, leaving behind radiation that interacted with a specific atmospheric level -- that is, they essentially took pictures of Titan's stratosphere and troposphere. The dark splotches in the two bottom images represent methane clouds and drizzle in the troposphere, which is the slice of atmosphere nearest to the ground. The drizzle is visible in two sets of images taken on different days, showing slightly different views of Titan; in both observations, the drizzle disappears after 10:30 local solar time. 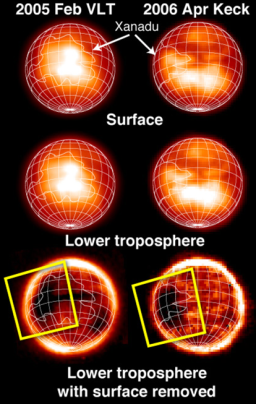 These images yielded the observation of morning drizzle near the bright patch called Xanadu (yellow box) on Titan. The two columns represent two observations of Titan in infrared wavelengths performed at different observatories (left, the Very Large Telescope, Chile, from February 28, 2005; right, Keck, Hawaii, from April 17, 2006). The top row contains images of Titan in a wavelength that penetrates through Titan's murky atmosphere to the surface; the middle row contains images in a wavelength that penetrates only partway, to the lower troposphere, at about 30 kilometers altitude. The images in the third row were created by subtracting the surface images from the troposphere images, leaving behind information about what was going on in the troposphere. The dark regions represent local concentrations of solid and liquid methane in tropospheric clouds and drizzle above the surface. The drizzle appears to be localized to the part of Titan where it is morning (the left sides of the globes); by 10:30 a.m. local time, the drizzle has disappeared.
It's very cool to see active weather patterns on another planet. Most solid worlds in our solar system don't change much with time. But here's one world that appears to be getting widespread drizzle or rain every morning (which is to say, once every 16 days, as that's how fast Titan rotates). Rain means that energy is moving around between Titan's surface and atmosphere and is likely driving present-day surface changes.

There's one part about the press release that bothers me, though. They lead with that statement that the morning drizzle arises because a humid airmass is being pushed up above "the western foothills of Titan's major continent, Xanadu." Now, people have long suspected that Xanadu, which is the largest, brightest feature visible in pre-Cassini images of Titan's surface, is a high-standing continent. But there's actually no global topographic map that indicates whether Xanadu is really higher than everything else. Locally, it certainly seems to display steep topography; here's a closeup from a "T13" Cassini RADAR image captured in April 2006: 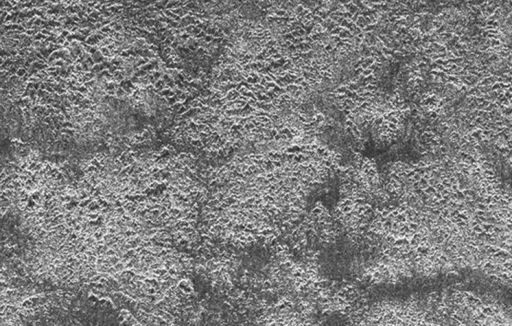 The central part of Xanadu contains a lot of topographic relief. This RADAR image is illuminated from the top; it reveals many spiky north-facing slopes. The peaky terrain is cut by a few apparently smoother valleys or plateaus. Some vertical striping in this image is an instrument artifact. This image covers an area about 260 kilometers wide by 170 kilometers high (160 by 100 miles).
However, analysis of this same data has indicated that Xanadu may not be high after all. In fact, it may be anomalously low in elevation! Here's some text from an abstract of a presentation made by Chuck Wood and coauthors at last week's Division of Planetary Sciences meeting.

Because of its size and reflectivity it had been proposed that Xanadu is an elevated continent. But it is not. A new topography-from-SAR technique shows that along the T13 Radar swath which completely transects Xanadu, the average topographic elevation is indistinguishable from that of the surrounding terrain. There are many mountains with peaks locally rising up to 1-2 kilometers, but the average elevation of the T13 pass is 200 m +/- 300 m lower than the radius of Titan. The highest point is near the swath center. Photogeologic interpretation suggests that Xanadu slopes to the south; three major river systems begin in the north and flow southward. ... Its eroded-looking terrain, large number of possible eroded impact craters, dune encroachment on its western edge, and apparent detached patches of similar material near its margins all suggest that Xanadu is a relict terrain, currently being disaggregated.

I don't believe that the fact that Xanadu is not, in fact, a continent has an impact on the conclusion of widespread morning drizzle presented in the Ádámkovics paper. Indeed, in the original paper, the idea that the drizzle could originate because of Xanadu's incorrectly described highstanding topography is only stated briefly at the very end. It's too bad they chose to feature it so prominently in the press release.

If it's not topography, what could be causing the drizzle? Well, if published authors can speculate wildly, then I can too. Xanadu may not be high, but it does have lots of river systems (which may not be flowing currently, but at least you can say they're younger than Xanadu itself), which is in sharp contrast to the much drier-looking sand dune areas to its west and east. Maybe there's drizzle there because it's a wetter part of Titan to begin with. Maybe Xanadu really is low-standing, so the "methane table" is close to the surface, which breathes methane into the atmosphere in the afternoon and at night, only to see it condense and then drizzle down in the morning.. Is that wild enough speculation for you? Like I said, I'm not an atmospheric scientist, so I probably don't know what I'm talking about!

For fun, here's the most recent Cassini ISS map of Titan, which is beginning to see interesting features in the far north as spring approaches there. Xanadu is easy to pick out; it's the brightest big splotch on the right side of the map, roughly centered on Titan's leading hemisphere. This map was part of a slew of public releases issued in celebration of the 10 years since Cassini's launch; go check them out on JPL's Photojournal. I notice that Photojournal has finally succumbed to the "One NASA" common look and feel that NASA is trying to enforce across all of its various centers' websites. 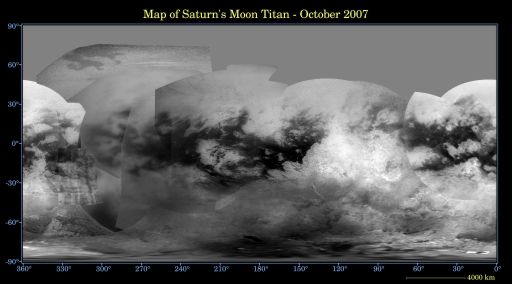 This map of Titan represents Cassini's view of Saturn's largest moon, three years into its mission. The images to make this map come from many of Cassini's 36 flybys of the moon to date. The images were taken in a near-infrared wavelength of 938 nanometers (near 1 micron), at which the methane Titan's thick atmosphere is relatively transparent, allowing a somewhat blurry view of the surface. Due to the efficient scattering of light by haze particles in the atmosphere, there is no topographic shading in these images. The north polar areas of the map are mostly gray because it is winter in Titan's northern hemisphere, and parts of the globe remain in permanent darkness. However, spring is approaching, and with it, the Sun is coming to more and more northerly latitudes. Recently, images of Titan's high northern latitudes have begun to reveal dark patches that are most likely hydrocarbon-filled lakes like those seen in RADAR images.