Press releases have been going out from NASA and ESA today, marking the 10th anniversary of the launch of Cassini-Huygens, October 15, 1997. From launch it took the spacecraft nearly seven years to get to Saturn, arriving on July 1, 2004. For those of us who didn't actually work on getting the project off the ground, it's not a particularly meaningful anniversary. However, I'll bet the decade mark is causing a lot of reflection among Cassini-Huygens project team members. To me, it's more significant that in the decade since Cassini-Huygens was launched, we have failed to initiate the development of the next outer planets flagship mission. (Or, at least, we've failed to initiate one that has not also been terminated.) Hopefully that situation will be rectified in the coming year or two. No matter what happens in the next couple of years, there's going to be a big time gap before the next flagship mission arrives at the next outer planet destination. My toddler daughter may be in high school before it happens.

The 10-years-since-launch press release was sobering to me for another reason; a very similar release immediately preceded the loss of Mars Global Surveyor. Cassini is a totally different spacecraft that hasn't even finished its prime mission yet, but still, the announcement gave me a weird superstitious worry for Cassini.

For a happier milestone, let's turn to Mars, where, earlier this week, Spirit celebrated two years since landing -- two Mars years, I mean. The seasons have turned twice since Spirit landed; Opportunity will reach the same milestone in a couple of weeks. It's an astonishing run, and both rovers are still hard at work. I did go to Steve Squyres' talk on the rovers on Tuesday morning at the Division of Planetary Sciences meeting, but it contained nothing surprising except for the acknowledgement that Spirit is now entering its third Mars year. Spirit's still "noodling around in Silica Valley" (Squyres' words), and Opportunity is currently "traipsing along the rim of Victoria crater," studying the cross-beds in rocks that were apparently formed from windblown sand, and trying to figure out why the bright band forming the cap of Victoria's rocks is bright.

Here's a relatively recent Navcam panorama from Opportunity, quite a pretty view:

Opportunity took the images for this panorama on sols 1,313 and 1,314 (October 3 and 4, 3007), as it perched on the interior slope of Duck Bay within Victoria crater.
I realized that it had been quite some time since I updated the sol-by-sol views of the Sun from both Spirit and Opportunity. The Sun has gotten quite a bit brighter to both rovers. According to Jim Bell, Pancam man, these images of the Sun will probably not return to their pre-storm brightness, because dust that is leaving the sky is settling on the Pancam windows, and the team's image calibration routines don't yet have a way of accounting for the attenuation of sunlight by dust on the windows. Anyway, here's the animations, followed by the daily images for Spirit and Opportunity: 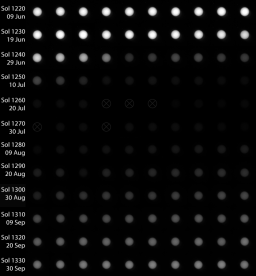 I noticed something funny while putting these together: the Sun in the recent images seemed smaller than the Sun in the first images in the series. At first I thought it was an optical illusion of some sort, but then I remembered that Mars, unlike Earth, has a very elliptical orbit, and is 36 million miles closer to the Sun at perihelion than at aphelion. Mars passed through perihelion this year, as it does every year, a couple of months before the southern summer solstice (which was on July 5); so Mars is now receding from the Sun, and consequently over the 110 sols' worth of images in these two visualizations, the Sun is slowly decreasing in size. Celestial mechanics is cool!

By the way, speaking of Mars, don't forget to enter this week's Mars trivia contest.