On Monday at the Division of Planetary Sciences meeting in Orlando there was an entire oral session devoted to YORP, which stands for Yarkovsky, O'Keefe, Radzievskii, and Paddack, all of whom studied the effects of solar radiation pressure on small bodies in the solar system. The YORP effect is a change in the rotation rate or obliquity (the angle that the rotation axis makes to the orbital plane) of a body caused by solar radiation pressure -- the same force that drives the solar sail -- and the delayed re-radiation of solar rays. These forces are negligible for planets and larger asteroids, but the smaller the asteroid, the more significant these forces become. (A related phenomenon, the Yarkovsky effect, has to do with solar radiation pressure pushing asteroids in such a way that the shapes of their orbits change; YORP specifically refers to changes in spin states and obliquity.)

I missed the opening talks in the session that would have given me an overview of YORP processes (I was in the concurrent session on Cassini at Iapetus), but later in the session Bill Bottke gave a useful overview of how YORP affects the evolution of the spins and orbits of asteroids. He said that YORP can spin up asteroids a lot. They can spin so fast that if they are rubble piles, they will "shed mass," which, he said, is one way of creating asteroid satellites. But the shed mass carries with it a disproportionate quantity of the spun-up asteroid's angular momentum, so the part of the asteroid that's left behind may actually be rotating more slowly. YORP can also act directly to decrease an asteroid's spin, causing it eventually to enter a tumbling rotation state. Eventually, the asteroid may tumble into an orientation where YORP may spin it back up again. This process can be cyclic, which explains the distribution of asteroid spins. If you start with a bell-curved distribution of spin speeds, YORP will tend to move asteroids toward extreme spin rates, either very slow or very fast; but the cyclic nature of the effect means it's also acting on these fast and slow rotators to slow them down or speed them up, moving asteroids from the extremes back toward the middle of the distribution. The end result is a fairly flat distribution, where there are roughly as many slow rotators as intermediate rotators as fast rotators. Incidentally, I notice that Bottke is one of those rare researchers who actually posts PDF copies of all his recently published papers on his website; check them out. 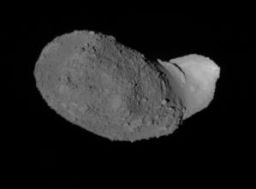 Hayabusa took this image of Itokawa at around 11:40 a.m. Japan Standard Time on November 4 [6 p.m. November 3 Pacific Standard Time] when it was about 1 kilometer (a little more than half a mile) from its surface.
YORP effects have been detected indirectly, for instance in the distributions of the orbits of families of asteroids created when one large asteroid suffers a disruptive impact that breaks it into many fragments of different sizes. Because YORP affects small bodies more than larger bodies, the larger fragments tend to retain their initial orbits, while the smaller bodies are dispersed more, often to the point that there middle of the distribution (where the larger bodies orbit) is evacuated of smaller bodies. But the big news this year is that, for the first time, YORP effects have been directly detected through highly precise measurement of changes in the spin rates of small bodies. There were three such detections presented at DPS: asteroids 54509 YORP (Lowry et al. and Taylor et al.), 1862 Apollo (Kaasalainen et al.), 25143 Itokawa (Kitazato et al.).

The first asteroid on which this was directly detected was (54509) YORP, until recently known as 2000 PH5, which has now been named for the four scientists who developed the theory of the YORP effect. (It seems to me that each of those guys should have gotten his own asteroid; it's not like there aren't enough asteroids to go around.) I showed up in the session just in time for the paper on Itokawa, only to find out that, after correcting an error in their analysis, Kitazato had to apologize to the room and say that they had actually not detected any change in spin rate, which implies that the YORP effect on Itokawa is smaller than 10% of its theoretically predicted value. It appears that, in general, when astronomers search for these direct detections, they are finding the effect to be much smaller than theory predicts. Apparently additional studies are in process of several other bodies (2004 DC, 200 DP107, and 1991 VH) on which workers hope to bag more direct detections of YORP effects.