Next week is the 39th annual meeting of the Division of Planetary Sciences of the American Astronomical Society, which is usually abbreviated to just "DPS." I'll be wrenching myself away from the baby to attend the first two days of it, all the way across the country in Orlando. I've now surveyed the program and it's packed. As always there are plenty of Cassini results to cover; there's also lots of news from both ground-based and space-based observatories studying asteroids, comets, and the Kuiper belt. This year is bringing the Uranian equinox, so there are many interesting presentations on that, and there have also been quite a few stellar occultations by Pluto to yield information about its size, shape, and atmosphere. The YORP effect was directly detected for the first time, and Mars Reconnaissance Orbiter and the Mars Exploration Rovers are picking apart Mars' chemistry and studying this year's dust storm in detail. I'll do my best to cover a broad sampling of the sessions and report on them here, and will see if I can get a few other people to contribute some notes from sessions I can't attend.

Here's what I got from my perusal of the program... 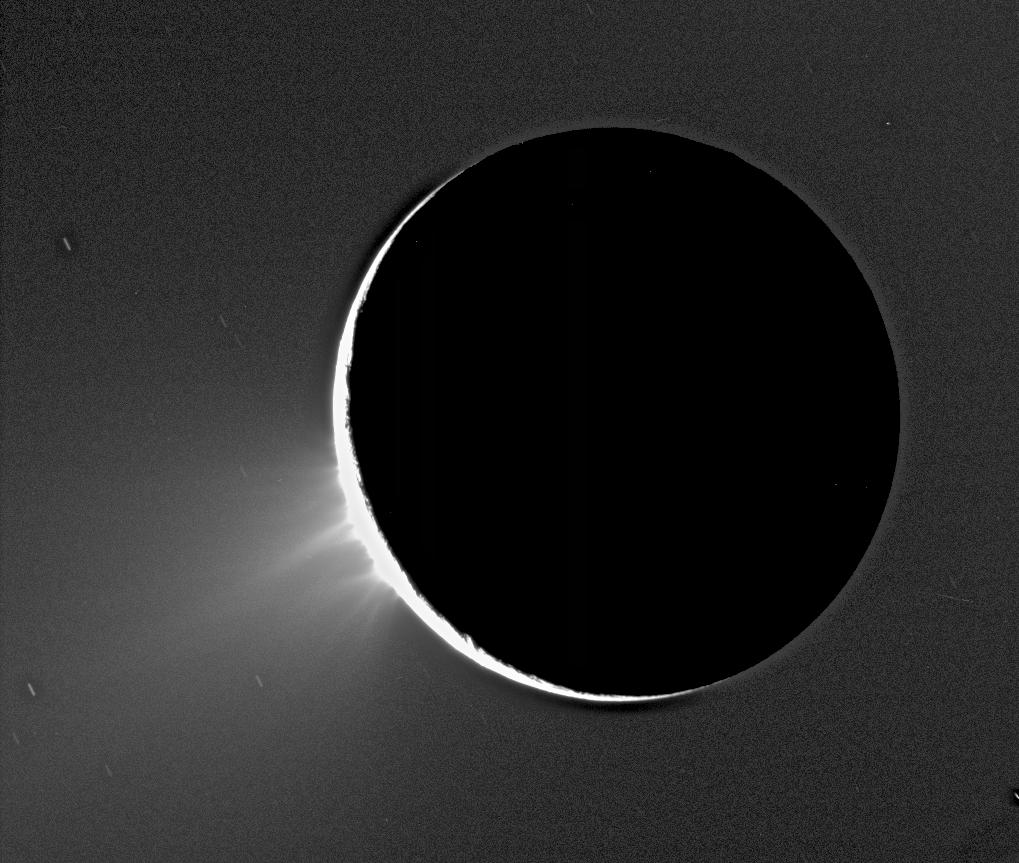 Click for full resolution (3.1 MB) >
An entire session Monday morning is devoted to Enceladus. Of particular interest is a set of papers describing the origins of its unique south polar geology (Meyer and Wisdom; Smith-Konter and Pappalardo; Matsuyama and Nimmo; Hurford et al.) and another set that's trying to figure out exactly what's coming out of the vents, and what that means (Smith et al.; Schneider et al.; and Schmidt et al.); and one paper considering whether any sea or ocean inside Enceladus might be suitable for life (Parkinson et al.).

At the same time as Enceladus is a session starting with Io and ending with Mercury for some reason. The Mercury talks include a presentation by Cecil and Rashkeev on their Earth-based observations of the side of Mercury not seen by Mariner 10. A third session details Jovian meteorology.

Later in the morning, in a session on the interiors of giant planets, Gerald Schubert delivers an update on the question of Saturn's rotation. There's a whole session devoted to the YORP effect. YORP stands for Yarkovsky, O'Keefe, Radzievskii, and Paddack, all of whom studied the effects of solar radiation pressure on small bodies in the solar system. The overview talk by Paddack and Rubincam should be helpful. Other papers discuss the three detections, just published in the last year, of YORP effects, on asteroids 54509 YORP (Lowry et al. and Taylor et al.), 1862 Apollo (Kaasalainen et al.), 25143 Itokawa (Kitazato et al.). A couple more interesting overview talks (William Bottke and Jean-Luc Margot) close the session.

Click for full resolution (3.1 MB) >
Unfortunately, that very interesting YORP session conflicts with another one I don't want to miss, where the first results from Cassini's recent encounter with Iapetus will be presented. Denk et al. open with imaging results; Clark et al. describe how VIMS saw it. Buratti et al. will discuss a wealth of photometric information (a presentation likely to be similar to the one she gave at the icy satellites meeting), and Schmedemann et al. Iapetus' stratigraphy -- which is on top, white or black, and what do the crater ages say? Hendrix and Hansen cover the UVIS data from the latest flyby, and Spencer et al. will cover CIRS measurements across a range of Saturnian satellites. One other very interesting piece of data from the September flyby that I am waiting for is the RADAR team's SAR imaging attempt; there's a poster on that by West et al., in the Wednesday afternoon session, that I'll hopefully be able to look at on Tuesday.

At lunchtime there'll be a town hall meeting chaired by Dave Lavery on some new technologies for space exploration that are coming out of NASA's Planetary Science Division.

Monday afternoon begins with concurrent sessions on Saturn's rings, NEO searches, and giant planet atmospheres. The rings session includes updates on Cassini CIRS (Spilker et al.) and radio science (Marouf et al.). A couple of other papers explore the rings' origins -- are they primordial (Stewart et al.) or are they a disrupted Centaur (Dones, Agnor, and Asphaug)? This is a question I get a lot for Planetary Radio so I'll be sure to check out their answers. Finally, Esposito and Elliott explore what the surface compositions of ring particles mean for the history of the ring system.

Credit: University of Hawai'i
The concurrent NEO session is equally interesting. Lindley Johnson opens by discussing NASA's point of view. Robert Jedicke will give a preview of the amazing capacity of the Pan-STARRS prototype expected to come online in 2008. Steven Chesley presents an interesting talk concerning the implications of the capacity of these second-generation telescopes to increase the rate of warnings of potential impacts for the public. Abell et al. discuss the possibility of sending astronauts to asteroids. A couple of overviews of the current knowledge and searches follow (Don Yeomans, Larson et al., and Edward Wright)

In the giant planet atmospheres session at the same time, there are a couple of Saturn talks followed by a bunch of stuff on Uranus, which is near its equinox. The most interesting talks cover Hubble (Erich Karkoschka) and radio telescope (Hofstadter, Butler, and Gurwell) and Palomar Adaptive Optics (Bauer et al.) observations.

Rings topics continue into a second afternoon session. Several presentations treat the enigmatic "propellers" in Saturn's A ring (Seiss et al., Sremcevic et al., and Tiscareno et al.), and several more look at the confusing structure of the F ring (Meinke, Esposito, and Colwell; Charnoz et al.). Hedman et al. look at some Saturnian rings that show heliotropic behavior -- they're farther away from Saturn at noon than at midnight. Makuch, Schmidt, and Spahn study where in the ring system Enceladus' ejected particles end up. Finally, the session wraps up with two talks on the Uranian ring plane crossing from ground-based observatories (de Pater et al.) and Hubble (Showalter et al.)

Up against the second ring session is a "Satellite Potpourii." There's interesting-looking talk on craters on Ganymede (Barlow and Godwin) and on Saturn's satellites (Dombard et al.). Elder et al. look at a strange diffuse band covering the equatorial region of Tethys' leading hemisphere. Matson, Castillo-Rogez, and Johnson wonder about Rhea's shape. Thomas et al. consider a few diverse Saturnian satellites and try to explain their surfaces. Clark et al. will talk about Dione's surface as seen by Cassini VIMS.

Credit: NASA / JPL / JHUAPL / Brown U.
On Tuesday morning, a special session aims to drum up interest in the study of extrasolar planets among DPS members who currently focus only on the solar system. A concurrent asteroids session focuses on individual asteroids, including binary NEA 2006 VV2 (Benner et al.) and Apophis (Binzel et al.). Also at the same time is a Mars session featuring updates on the rovers (Steven Squyres and McCoy et al.). Several workers make presentations on phyllosilicates and water-related minerals (Wray et al.; Poulet et al.. A couple of papers comment on Mars' past climate; William Hartmann shows evidence for icy activity in the last few tens of millions of years, and Lee and McKay make the case that Mars must have been cold and dry for much of its history. Finally, there's a paper by Beyer et al. on HiRISE observation of Martian slope streaks.

Later in the morning is a special session on New Horizons at Jupiter. Many of these presentations will no doubt be similar to ones given at the icy satellites workshop in September, but there are some that were not covered there: Baines et al. on Jovian meteorology and Showalter et al. on the rings, among others.

Tuesday afternoon begins with the prize lectures. Andy Ingersoll received the Kuiper prize in recognition of outstanding contribution to planetary science; he'll speak on giant planet atmospheres. Francis Nimmo received the Urey prize, recognizing outstanding achievements by a young scientist, and will talk about the geodynamics of icy bodies. There are usually three prize lectures, but it appears the Sagan award, recognizing outstanding communication by a planetary scientist to the general public, is not being awarded this year.

Credit: NASA, ESA, and Lucy McFadden (U. Maryland)
Wednesday morning features more exoplanets talks and some on Mars' atmosphere. They overlap with an asteroids session, in which McFadden et al. and Li et al. present on Hubble views of Vesta, and Carry et al. on adaptive optics-equipped telescopic observations of Pallas. There's a related poster by Schmidt et al. later in the day on Hubble observations of Pallas.

In the afternoon, attention turns to formation of planetary and satellite systems and the detailed compositions of asteroids. The poster session covers future missions, asteroids, comets, Saturn's atmosphere and icy moons, trans-Neptunian objects, Mars' surface and interior, and planetary formation. There is a poster by Rita Schulz on the detailed science plans for the September 2008 flyby of asteroids 2867 Steins by Rosetta, and an overview by Conrad et al. on the decade of contributions of the Keck II telescope to planetary science. Trilling et al. describe 35,000 asteroids serendipitously detected in Spitzer data. Bowles et al. deliver an update on the Martian dust storm from Mars Climate Sounder. West et al. show SAR imaging of Iapetus.

On Thursday morning is a comet session. Belton and Drahus find that activity in comet Tempel 1's northern hemisphere is accelerating its spin, which is obviously important for planning the flyby geometry of the Stardust NExt mission (which will re-visit the Deep