On Monday I posted a still image of Earth taken by the HDTV camera aboard Kaguya. They have now posted the video that the still image of Earth came from. It isn't much, only a one-minute video representing eight minutes of real time, which is hardly long enough to see any motion; but Earth does rotate just a little bit from the beginning to the end. Here's a blink animation of the first and last frames of the video (thanks to nop on unmannedspaceflight.com, who grabbed it from a Japanese-language discussion forum):

Kaguya shot video of Earth using its HDTV camera from a distance of 110,000 kilometers (68,000 miles). It is the farthest that any HDTV camera has ever traveled from Earth. The two images in this animation were taken eight minute apart and represent each end of Kaguya's first short video of Earth in motion.
It turns out this isn't the only photo of Earth taken by Kaguya this week; Kaguya also caught Earth in a shot designed to monitor the condition of its solar paddle. 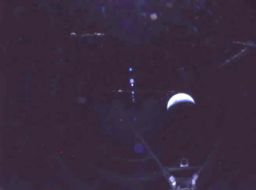 Kaguya is equipped with an onboard camera that can document the position of its solar paddle, antenna, and other hardware. In this image of the solar paddle, taken on October 3, 2007, a crescent Earth is visible through the struts of the paddle's triangular truss.
(To understand the geometry of this image, check my previous post on Kaguya's self-portraits.) The text posted with the image seems to indicate that they didn't plan for Earth to be in the background, they just caught it as part of a previously planned image with the monitoring camera. The text also indicates that Kaguya is no longer in Earth orbit, but is traversing the space between Earth and Moon. Kaguya is due to enter lunar orbit at 21:01:01 UTC today, in just a few hours -- I'll post further news when I hear it!