JAXA reports that Kaguya has successfully completed its various orbit adjustment maneuvers in preparation for Lunar Orbit Insertion on October 3 at 21:01 UTC. During the period in Earth orbit they seem to have been checking out their instruments, including the first HDTV camera to be sent beyond Earth orbit. HDTV cameras have been sent to the Space Station, but that's only 340 kilometers above Earth; Kaguya was already 110,000 kilometers from Earth when this photo was taken, and will be about three times farther away when it's in lunar orbit. The image below is just a still, but it is apparently a part of real, moving, HD video of Earth; the JAXA site says it was taken in a mode such that time is sped up by a factor of eight. 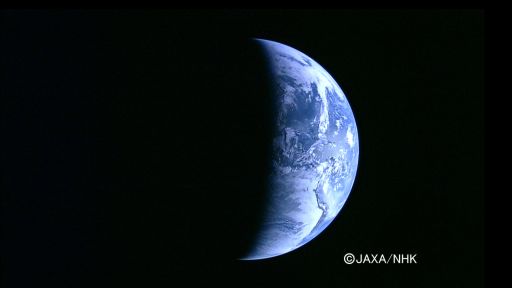 Kaguya took this photo of Earth using its HDTV camera from a distance of 110,000 kilometers (68,000 miles). It is the farthest that any HDTV camera has ever traveled from Earth. This is a still image, but it was taken as part of a test of the camera's ability to shoot video.
These high-definition images of a moving Earth rotating in the blackness of space could be powerful ones for Earth advocacy, I think; I hope JAXA makes them publicly available! I can't wait to see what kinds of HD movies may appear of Earth and Moon in mutual motion. Earth-in-space images tend to have Earth fixed, like a globe sitting on your desk. If we see Earth in motion, might it seem more fragile? Japan has sent this HD camera to space at a good time, for American TV viewers anyway; thanks to increased satellite capacity the DirecTV satellite service is currently undergoing an expansion of its HD offerings. I hope to see this video make its way to television soon.

I have added the Kaguya image to my page of Earth photos taken from planetary spacecraft. At the same time, I added this nifty sequence taken nearly 40 years ago from the Zond 7 spacecraft -- a piece of space history dug up, once again, by Ted Stryk.

Zond 7 flew past the Moon, taking this sequence of images of Earth setting behind the lunar limb, on August 9, 1969. The sequence actually consists of only three images; the second one was simulated from data in the others to even out the Earthset sequence.