I am trying to do a better job of keeping my inbox cleared out, so here's a potpourri of topics that I thought were too interesting to delete, but that I couldn't find the time to write full stories on.SOHO, the Solar and Heliospheric Observatory, has discovered more than a thousand comets, so it hardly seems to be news when it finds another one; but this week came the news that it found its first officially periodic one. That is, one comet was found to return on the same path, taking about four years to circle the Sun; it was first seen in 1999, then in September 2003. It wasn't realized right away that these two comets were one and the same. In 2005, a graduate student, Sebastian Hoenig, realized that the two orbits that had been determined for the two objects were very similar. If they were, in fact, the same object, he could predict when it would return; and indeed the comet returned, right on schedule, on September 11, 2007. So, great, it's a periodic comet. Except it doesn't look like a comet; there's no coma and no tail. It may be the fried cinder of a comet, whose previous close passages to the Sun have left behind a refractory crust of dark material that is sealing in icier stuff below.

The images for this color view of Itokawa were taken by Hayabusa during the descent phase of the mission, on November 4, 2005 at 01:11.
There was a little press release from MIT describing a clever solution to a problem I hadn't even considered. The problem: how could astronauts walk around an asteroid to study it when the gravity on the asteroid is so slight that the tiniest twitch of a human's muscle could send her flying off into space? Anchors of various designs have apparently been proposed, but considering what Itokawa's gravelly surface looked like, these may not be able to grab hold of the asteroid's surface. Instead, they propose completely encircling the asteroid with a lightweight rope that could serve as a tether. The system could be deployed by flying a spool of rope with a remote-controlled rocket or a rocket-propelled astronaut(!) around the asteroid. You may be thinking that this is a solution to a problem no one is really interested in solving, but in fact the low gravity on an asteroid that makes it hard to work on makes it a very attractive target. Getting humans down to the surface of Mars and back off of it will be incredibly difficult problems to solve. We may well see astronauts "walking" on an asteroid (or, perhaps, Phobos or Deimos) long before they walk on Mars.

And the MESSENGER team has pronounced their radio science system ready to perform during the three upcoming Mercury flybys, the first of which is on January 14 (less than four months away! Woo hoo!). With careful Doppler tracking of the spacecraft's radio signal as it flies by Mercury, they'll be able to put some constraints on the size of Mercury's core and whether it's solid or liquid. The MESSENGER team is eager to bag some of their mission success science goals even before they go in to orbit in March 2011. 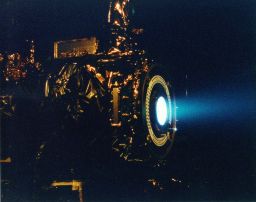 A prototype of one of Deep Space 1's ion engines emits glowing xenon ions during a vacuum chamber test at the Jet Propulsion Laboratory in 2001.
Finally, a little tidbit from the Dawn pre-launch press conference that I thought was kind of cool. Marc Rayman was describing some of the systems checkouts they'd be doing with the spacecraft during the post-launch testing period, which will last for the first 80 days following launch. One important set of tests will carefully gauge the in-flight performance of their ion engines. To get the most accurate measurements of ion engine performance, they will rotate the spacecraft so that the thrust from the engines is directed precisely away from Earth, pushing the spacecraft back in the direction where it came from! Why do they do that? Because by thrusting directly toward Earth, the thrust from the ion engines will all go toward changing the velocity of the spacecraft in a direction along the line-of-sight to Earth, and we can measure line-of-sight changes in velocity with minute precision using Doppler tracking from Earth-based radio antennas. The measurements will give Dawn's controllers very precise knowledge about the performance of Dawn's engines, and the hours or days of ion thrust during testing won't end up changing its orbit too much; it will take weeks and months of ion engine thrusting to get Dawn to Mars and then Vesta.

And, lest I forget, check out Carnival of Space #22 over at Wandering Space; this week there's a theme to it, "The Art of Space," so pretty pictures abound!