Planetary Society volunteer Ken Kremer is reporting for us from the Kennedy Space Center, where he watched Dawn launch on September 27. Kremer is a research scientist who spends his spare time giving public outreach presentations on behalf of The Planetary Society as a volunteer and NASA's Jet Propulsion Laboratory as a Solar System Ambassador. Thanks Ken! --ESL

According to Keyur Patel, Dawn project manager, Dawn's huge solar arrays were deployed as of 5 p.m. UTC. He added that the time of deployment had not yet been determined because additional time is needed to analyze the telemetry sent to Earth from all spacecraft systems. After the post-launch press conference at Kennedy Space Center, Keyur told me that the panels are now pointing to the sun and charging up the batteries.

The giant solar arrays stretch approximately 19.7 meters (65 feet) from tip to tip, including the spacecraft. Each of the wings is nine meters long, consists of five square panels, and weighs about 63 kilograms (139 pounds). They help to harness power from the sun to the innovative ion engines. The power is used to ionize the xenon fuel onboard and accelerate the ions at high speed which in turn accelerates the spacecraft. According to Marc Rayman, they are the largest solar arrays ever used on a planetary spacecraft. They need to be so big to provide sufficient power to the spacecraft as it flies deeply into the asteroid belt. The arrays generate 10 kilowatts of power at Earth's distance from the Sun, but only 1.3 kilowatts at Ceres, which is three times farther away. 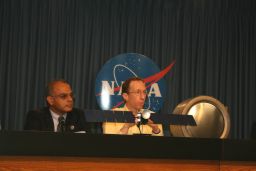 Keyur Patel and Marc Rayman speak at Kennedy Space Center's press site. In front of Rayman is a model of the Dawn spacecraft; to his left is an ion thruster.